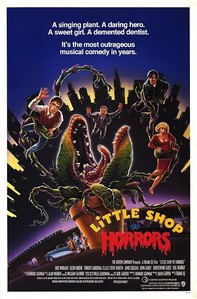 There is one genre of movie I try to avoid whenever possible, and it is musicals.  There are exceptons: My Fair Lady, Singin' in the Rain and, of course, The Rocky Horror Picture Show come to mind.  Since I'm a guy, I know the first assumption is that I see something non-masculine about musicals.  That's not really true.  I just find them to be largely insipid, bottom-of-the-barrel entertainment.  I am always happy when I run into one that proves to be the exception.

That wasn't how I always felt about Little Shop of Horrors.  It came out when I was in eighth grade, and I really, really wanted to see it, largely based on the fact that "Dentist!" got played frequently on Dr. Demento's radio show at the time.  I remember the movie getting lukewarm reviews, but that wasn't something that would have phased me.  What did, as usual for that age, is that cash flow was largely determined by allowance.  It was still a point where movies were a family thing, and my parents had no interest in seeing it.

So it came to pass that I had seen the Roger Corman original a couple times before I ever saw this version.  When I finally did, I was disappointed to say the least.  Steve Martin's part was great (the dentist part is also a highlight of the original), but there was everything else in it that I hated in musicals.  It also was obviously filmed on a soundstage, meant to look purposely fake.  I was hoping for something a bit more deranged, and what I got was a half-baked romance.

Or, maybe, I was just in a mood.  Who knows.  The original was intentionally funny in an often dark way, and perhaps I was just so put off by the fact that the movie looked like a stage production that I didn't pay attention to how much of a loving tribute it actually was.

Seymour Krelborn (Rick Moranis) works in a flower shop on Skid Row for his guardian Mushnik (Vincent Gardenia).  He is secretly in love with his actual paid coworker Audrey (Ellen Greene).  Business has been bad, and Mushnik is on the verge of closing the store, when Seymour presents him with a project he has been working on.  Turns out that there was a total eclipse of the sun a week before, and a strange plant appeared at a Chinese plant shop.  Seymour bought it and has been trying to figure out how to make it prosper.  He suggests that if Mushnik puts it in the window it will attract customers simply out of curiosity.

Mushnik is at first reluctant, but a customer (Christopher Guest) comes running in as soon as Seymour puts the planet (dubbed Audrey II) in the window.  After selling $100.00 worth of flowers, Mushnik is overjoyed, but concerned when Audrey II suddenly slumps over.  Seymour tries everything, eventually discovering that what the plant needs to prosper is blood.  With frequent feedings, Audrey II begins to grow and attract more customers to the shop and making Seymour a local celebrity.

Audrey II, in fact, grows to a size where Seymour can no longer maintain him on his own.  That is when the plant begins to talk to him, promising him everything in the word he wants - including Audrey - if Seymour will only bring food.  Conveniently, Audrey's abusive boyfriend Orin Scrivello - D.D.S. (Steve Martin) has a practice nearby.  Audrey II convinces Seymour that the dentist would make a good meal, so Krelborn sneaks into the dentist's office while a masochistic patient (Bill Murray) frustrates Scrivello to his near breaking point.  He decides to take his frustrations out on Seymour, who eventually pulls a gun on Scrivello while the doctor is high on nitrous oxide.  The doctor saves Seymour the trouble by managing to die on his own.

Seymour takes Scrivello back to the flower shop to dismember him, but Mushnik happens to stop by and see what is happening.  Horrified, he waits until the next day to confront Seymour, who had a brief moment of happiness when Audrey revealed to him that she has always liked him, and having Scrivello out of the way has freed her.  Mushnik agrees to let Seymour go if he tells him the secret of caring for Audrey II, but the plant decides to show Mushnik personally.

Fearing what may happen if he lets things continue, Seymour throws aside his celebrity and makes plans with Audrey to leave.  Audrey II, though, decides that maybe the original Audrey would be better as plant food.  Seymour rescues her and the two make a break for it, only to be confronted by a the head of a botany corporation (Jim Belushi) who informs him of a plan to take leaf cuttings so everyone in the country can have an Audrey II of their own.  Realizing this was the plant's plan all along, Seymour resolves to get rid of it before the entire human race becomes dinner.

It might be obvious from the list of names that this is full of cameos of actors you would see in many comedies from the 1980s.  Steve Martin's part is quite significant, while Bill Murray manages to fill Jack Nicholson's shoes quite well as the patient.  It sounds like he may have made quite the "mess" of Scrivello's dental chair.

John Candy shows up as a wacky radio show host, while Christopher Guest camps it up as the first customer to show interest in Audrey II.  Jim Belushi is in the film long enough to provide a plot point but not ruin the movie.

Levi Stubbs of the Four Tops performs the vocal work for Audrey II, imbuing the plant with the proper amount of menace.  His singing is also one of the highlights, with "Mean Green Mother from Outer Space" being written specifically with him in mind for the film.  Vincent Gardenia mainly plays Mushnik quite the same Mel Welles plays him in the original, largely as a borscht-belt stereotype.

Rick Moranis is the perfect incarnation of Seymour Krelborn, and surprisingly he is not that bad of a singer, either.  Despite the effects and everything else, this movie belongs to him, and it is sad that his acting career didn't last longer.  He may have always played nerd characters, but he always played them well.

Ellen Greene is one hell of a singer, but the voice she uses for Audrey is nerve wracking.  I think this is one of the reasons I had a major problem with this movie previously.  Still, nothing wrong with her acting or her performance, but the Audrey character itself is a bit off-putting.  I'll forgive it, though, since "Somewhere That's Green" is one of the best filmed musical sequences ever.  We're suddenly taken out of what is meant to be a satirical take on b-movies and presented an iconic view of '60s American suburban life that never really existed.  It's beautiful and emotional in a way that most musical segments are not.

Despite how good the movie gets as it goes on, I still had some of my old reservations as it begins.  Clever naming the girls that are the Greek chorus after '60s girl groups, but them being both occasional characters and then, suddenly, in a narrator role is jarring.  I understand it was to give the musical more of a period feel, but they are unnecessary.  They do introduce the "Skid Row (Downtown)" segment, which is one of the weakest songs in the movie.

I am glad that I got to see this again, and that I stuck with it through the beginning parts, as looking back it does have great practical effects and a lot of that strange humor that makes the best '80s comedies as good as they are.  It also helps that the music can be separated from the movie in many cases and enjoyed on its own.  The stage play and, indeed, the original movie are significantly different in many ways, but Little Shop of Horrors has managed to survive and remain entertaining after all these years.

It still doesn't change my opinion on the majority of musicals.