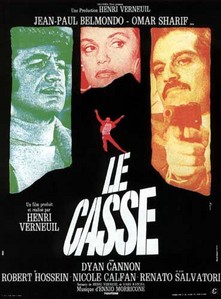 The big Hollywood heist film, largely known for its larger-than-life antiheroes, stuntwork and long, drawn-out car chases.  Before the action film changed to what most of us are familiar with in the 1980s, the above largely began to define American films from the late '60s and into the 1970s.  From well-regarded films such as Bullitt and The French Connection to hangers-on like Grand Theft Auto, it became a source of escapist entertainment for American audiences and something for critics to hang their disdain on.

After all, European films (if you consciously ignored most mainstream films coming out of England and Italy) were so much more intellectual, right?  This was real cinema.

Except it turns out that European audiences like their heists and their car chases just as much as we do.  That is why Le casse, released under the English title The Burglars, had the biggest opening in France up to that time.  Give art its due, but seeing Jean-Paul Belmondo jumping between buses to escape an evil Omar Sharif is too much for most audiences to resist.

Azad (Belmondo) is the leader of a group of sophisticated international thieves.  With his on-again, off-again lover Hélène (Nicole Calfan) and his accomplices Ralph (Robert Hossein) and Renzi (Renato Savlatori) in along for the ride, he successfully steals a stash of emeralds from the Athenian mansion of a millionaire named Tasco (José Luis de Villalonga).  The only complication is that the robbers' car, severely out of place in Tasco's neighborhood, is spotted by Inspector Abel Zacharia (Sharif) while he is on patrol.  Azad pretends that the vehicle is broken down, thinking that he has thrown the officer off the trail.

The next day further complications set in as the boat they were supposed to meet has suffered storm damages and is in the dock for repairs, delaying their departure by five days.  Azad also notices that the group is being followed.  He sends Hélène off on a commercial liner, while dropping Ralph and Renzi back at their hideout before leading his pursuer on a chase through Athens.  Finally caught at a dead end, Azad confronts the other drive, who turns out to be the inspector.  By this point Azad has had time to hide the emeralds, and so escapes for the moment.

Zacharia is a determined man, and next confronts Ralph and Renzi and gunpoint to find out where Azad hid the emeralds, resulting in Renzi's death.  He also again confronts Azad with a proposal: give up the emeralds for free passage out of the country, or face arrest.  Azad seems to consider the situation until he finds out about Renzi's death, leading to him going on the lam.  On top of everything else, Hélène has become fed up with their non-relationship, and decides to pursue someone else - something Azad is fine with when he meets Lena (Dyan Cannon), an erotic model and performer that catches his interest.

The thing he hasn't counted on is Zacharia's determination to get the emeralds for himself, and his willingness to bring the weight of the Athenian police with him.  What had begun as a simple in-and-out heist is now a battle for survival and freedom, with or without the emeralds.

Jean-Paul Belmondo plays the part of a professional thief well, and also does most of his stunts - save some of the driving - in the movie.  Old filming techniques where its obvious that there is part of a car in front of a green screen kind of take one out of the film a bit, but once the central car chase gets going, it really gets going.  I was often of the thought throughout that, though director Henri Verneuil was knowingly making an escapist film, he was also satirizing some of the sillier aspects.  Let's just say this particular chase, in some cases, rivals the one from The Blues Brothers - just not the level of vehicle destruction.

While Azad is definitely a criminal with questionable morals (although he is given the "gentleman thief" trait of not purposely killing anyone), he pales in comparison Abel Zacharia.  Omar Sharif plays him as evil and as slimy as possible.  There really is no more motivation for him other than he doesn't like being a low-paid public servant, although he enjoys the perks he gets, from free food to the immense power he can wield.  The only reason any of Azad's group would be allowed to leave is because Zacharia doesn't want to reveal himself as being corrupt, probably because he's afraid he would have to share.

Both Nicole Calfan and Dyan Cannon are there to play bland roles, one as some late motivation and the other as the reluctant double agent.  More interesting is Robert Hossein, as Ralph seems to be someone who could be dangerous, but knows just that the appearance is enough to where he doesn't have to prove it too often.  Surprisingly, there is none of the tension in the group of having a traitor wanting everything for themselves.

There are some pacing problems, as the first hour is one third heist and one third car chase.  And while there is quite a bit of great stunt work throughout, the movie really gets going once it focuses largely on the rivalry between Azad and Zacharia.  On the whole, it is quite satisfying, and one of the better films of its type from the 1970s.