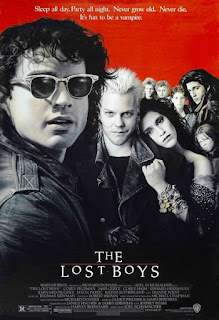 One thing that can get annoying when watching a movie with me is that I get wrapped up in the technical aspects.  I have wondered if this is because I have spent so much time reading about films rather than sitting back and enjoying them like others, but that's not it.  I truly enjoy watching movies, and the technical aspects that lead to visual story telling are much of my enjoyment.  I have enjoyed a number of movies largely due to decisions the director and cinematographer make, while ignoring obvious plot holes and serious deficiencies in acting.

These are not criticisms of The Lost Boys, mind you.  It's largely to set up why I remembered certain aspects of this film above others.  I saw it around the time it came out, and probably last saw it in the early 1990s.  What always struck me was Joel Schumacher's direction, from the long flying shots over the ocean and heading toward the boardwalk, the set design of the destroyed resort hotel and the creative effects as the vampires die.  It made me a fan of his, at least up to the point that he ruined the first Batman movie series.

Lucy (Dianne Wiest) has just divorced her husband and is moving back in with her father (Barnard Hughes) in the California beach town of Santa Carla.  Her boys Michael (Jason Patric) and Sam (Corey Haim) are not happy about the move, as their grandfather is rather eccentric, not even owning a television.  With nothing to do, they investigate the town's boardwalk atmosphere.

During a concert, Michael is suddenly entranced by a woman in the audience (Jami Gertz).  He follows her, only to have her take off with her boyfriend David (Kiefer Sutherland) and his miscreant pals.  He later finds out her name is Star, and confronts the boyfriend, only to be welcomed as a possible member in their gang. He follows the group to a resort hotel that was destroyed during the 1909 San Francisco earthquake, which serves as their clubhouse.  Despite Star's warning, he imbibes of what he believes is wine.

The next day he finds himself sleeping late, being sensitive to sunlight and trying to feast on Sam's blood while he babysits him.  Sam himself has had his own encounter, only with amateur vampire hunters Edgar (Corey Feldman) and Alan Frog (Jamison Newlander), who have provided him with comics explaining vampires and how to get rid of them.  Upon finding out that Michael is turning, he ignores the Frog brothers' initial advice to drive a stake into him and instead sets off on a quest to destroy the head vampire so that Michael will return to normal.

To Michael's credit, he holds back his urges to feed, which would finalize his transformation, although Star admits that she is close to giving in.  Their mother Lucy, unaware of what is happening, becomes increasingly frustrated, thinking that her sons are trying to sabotage her relationship with her new boss Max (Edward Hermann), with whom she is falling in love.

Sam and the Frogs make things worse when, in an effort to save Michael, they enter the vampires' lair and kill Marco (Alex Winter), sparking the wrath of the surviving three.  With everyone in danger, and Michael's life hanging on the line, they plan a final standoff at the grandfather's house, using all their knowledge about vampires to take them down.

As I said, I remembered much the visual aspect of this movie over the years, as well as the punchline at the end of the film.  I had forgotten how much humor was in the movie, largely carried by Barnard Hughes and Cory Haim, although Feldman and Jamison Newlander do their part of playing the Frog brothers straight and without any type of forced irony you would see in a movie today.

The other thing I failed, thankfully, to remember is the concert scene.  It's an important introduction of Star into the story, but the way its done brings the film briefly to a crashing, unintentionally hilarious halt.  The mulleted, shirtless bodybuilder thrusting with his saxophone was a member of Tina Turner's band at the time, but regardless of whatever real music chops he has, it is a reminder of just how old this movie is now.  I really can't see that it worked back in 1987, which is another reason I am sure I put it out of my mind.


I still enjoy The Lost Boys quite a bit, but it is scenes like that and many more that, despite the fact much of the action and humor still translates, that remind me that it is uncomfortably a product of its time.  It's best viewed as a movie taking place in the time and place it does, as the styles of the time date this harder than most of the vampire movies that came before it.  Even its contemporary Fright Night isn't as brightly '80s as this.

It can be said that without this and Fright Night that vampire movies would have died a sad, withering death, as '80s horror had largely abandoned the more traditional monsters, with the exception being a sort of self-reverential comedy like Monster Squad.  For better or worse, and considering how dated the movie looks, The Lost Boys is as responsible for influencing vampire movies over the last 30 years as Dracula was for influencing them for a half-century prior.

It also contains some of the best vampire stakings ever filmed, all of them better than anything in True Blood, so there is that.