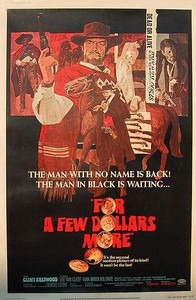 In typical Italian fashion, For a Few Dollars More was practically in production before Sergio Leone's previous film, A Fistful of Dollars, was in the theater.  That movie made Clint Eastwood, known largely at the time for his part in the U.S. television show Rawhide, an international star, and this sort-of sequel went on to cement his reputation.  It also served to resurrect Lee Van Cleef's career.

Still, this movie is overshadowed by both the preceding movie and the other one in the unofficial "Man Without a Name" trilogy, The Good, the Bad and the Ugly.  It does contain some elements that would be reused in the latter, and is a tighter story, though not as intricate.

Col. Douglas Mortimer (Van Cleef) is a bounty hunter.  After dispatching his current quarry, he goes for a bit more profit in pursuing "Baby" Red Cavanaugh (José Marco), only to find out that another bounty hunter named Monco (Eastwood) is after the same bounty.  Monco gets to Cavanaugh first, setting the foundation for a rivalry between the two.

The situation is exacerbated when a dangerous outlaw known as El Indio (Gian Maria Volontè) is rescued from prison by his former associate Groggy (Luigi Pistilli), resulting in the massacre of several guards and the warden.  With a $10000.00 bounty on Indio's head, both Mortimer and Monco begin their pursuit, deducing (rightly) that Indio and his gang when attempt to rob a supposedly impenetrable bank in El Paso.

After a show of strength from both hunters, they settle on an uneasy partnership.  Monco agrees to infiltrate Indio's gang by freeing Sancho Perez (Panos Papadopulus), an important member of the gang that will make the robbery go smoother.  Monco is accepted by Indio, and tasked with taking three of his men to rob a bank in Santa Cruz as a diversion.  Monco instead kills the three men on the way, but forces the telegraph operator in Santa Cruz to send out an alert that a robbery occurred.

With the lawmen away from El Paso, El Indio's gang does hit the bank.  Both Mortimer and Monco lay in wait, but the robbers use a surprise tactic and leave town with the bank's safe.  Frustrated, Monco declares the partnership dissolved, but Mortimer encourages him to keep the agreement, joining back up with Indio and encouraging him to take his band north toward an ambush point.  Instead, Monco tries to convince Indio to go south, but the bandit decides instead to go to a different location: a small town called Agua Caliente, which is hostile to outsiders.

It turns out, though, that Mortimer has already considered this option, and he is waiting for the bandits as well.  He helps Indio get the safe open, but when both he and Monco (separately) try to steal the money in the night, it is revealed that the robber knew all along that they were bounty hunters.  They are severely beaten, but Indio has even one more plan of his own: let the bounty hunters go, sending his men after them, knowing that his own men will be killed and, during the fracas, making off with all the money along with Nino (Ray Owens), his trusted compatriot.  What he doesn't know is that Groggy is suspicious, but also that Mortimer has more of a stake in bringing Indio down than just the money.

As is often the case with Sergio Leone's westerns, there is a general plot that contains as many twists and turns as your typical giallo film.  Both Eastwood and Van Cleef put forth strong performances, but often it is Volontè's complex performance that stands out.  Many of the sets were reused for The Good, the Bad and the Ugly, and will be recognizable - especially the arena where the final standoff occurs.

Also, as is normal with Leone, the filming is beautiful.  It would have been wonderful if he had ever got to really film in this part of the United States, but Almeria is often a good stand-in - except for the brief glimpses of Spanish castles and obvious Mediterranean palms.  It's still quite breathtaking, and it looks like nothing else that was coming out at the time, so much that if one didn't know the stars so well it would be hard to distinguish it from the movies of the directors Leone inspired.