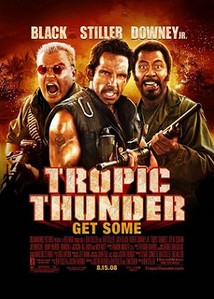 One of the first shows on Fox, back when it only broadcast on the weekends and after a certain time at night on UHF stations, was The Ben Stiller Show.  It had not only great comedy bits, but often satirized how Hollywood and advertisers viewed Generation X.  The show lasted a short time, but it left a lasting impression that there was at least one comedian that "got us."

That was, until, the typical Hollywood Gen X treatment that was Reality Bites.

Since then Stiller has been hit and miss.  I never bothered with the Zoolander movies, but loved his part as the evil gym owner in Dodgeball.  The Cable Guy is arguably one of the worst movies of the '90s, though.

So here I find myself surprised that Tropic Thunder has become a cult film for a number of Millenials.  It should not be that surprising as it is the only movie that lived up to the promise of his original show.

Action hero Tugg Speedman (Stiller) has seen his career bottom out after trying his hands at drama.  To revive his fading image he has agreed to star in a story adapted from the biography of Four Leaf Tayback (Nick Nolte), a Vietnam veteran who lost both of his hands while trying to save the rest of his platoon.  To add realism, the movie is being filmed on location.

Unhappy with the pace of filming, Les Grossman (Tom Cruise), the shadowy software mogul financing the film, demands some changes - the main one being to increase realism by releasing the actors into the jungle to experience the "reality" of the Vietnam War.  They are to be filmed by hidden cameras with timed pyrotechnics for them to react to.  They are dropped off by helicopter along with their director Damien Cockburn (Steve Coogan), who promptly steps on an old mine left over from the real war.  Thinking it's a special effect, Tuggman reacts in a typical action star way.  The explosion, however, has attracted the attention of the Flaming Dragons, an armed opium ring operating in the area that believes the actors are from the DEA.

Coming under fire, the group flees into the jungle and most of them come to realize the predicament they are in.  Speedman, however, continues to believe it's a movie, even has he begins to go native and is eventually captured by the Flaming Dragons and forced to act out scenes from his critically panned drama film, which happens to be the only movie the compound has to watch.

Meanwhile, Speedman's agent Rick Peck (Matthew McConaughey) tries to convince Grossman to rescue the crew or, at the very least, make sure Speedman gets TiVo, which was in his contract.  Eventually the crew must do what they can with guns filled with blanks and nothing else but Hollywood magic to rescue not only Speedman from the Flaming Dragons, but the movie itself (and their careers) from financial disaster.

Tropic Thunder may be the best movie Ben Stiller has directed, but it still has plenty of flaws.  About the first 20 minutes or so until they land in the jungle are quite rough going, as few of the jokes that point work.  The introduction is funny, but between there and the main plot it's just flat.  Happily, once things get going, there is enough true action in the movie that there isn't the need to fill it in with jokes that may or may not work.

And, from that point on, they work.  Everything from Speedman becoming one with the land to a bald, bespectacled Tom Cruise dancing to Flo Rida (keep in mind this was 2008) works.  It may not be laugh-out-loud funny, but it's the type of humor that works with a movie like this.

At this point in their careers it is a bit of a question about how self-aware some of the real actors are.  Tropic Thunder is supposed to be a parody of a number of things, from action films to found footage to stars with their heads up their rectums, but some of the participants are stars that are known somewhat to have rectal cranial insertian syndrome.  It's telling that many of the action stars parodied are nowhere to be seen, although it could be said that the Expendables movies are self-parody in themselves.

It's not anywhere near perfect, and probably won't be everyone's cup of tea, but Tropic Thunder at least isn't another comedy wallowing solely in fat jokes and body fluids.  It's also a pretty good action movie in itself.  Too bad Stiller is more interested in making something like The Secret Life of Walter Mitty instead of more movies like this.