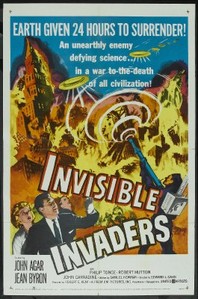 One way to tell that a movie was largely thrown together at the last minute, typically without a budget or without anyone involved really giving a damn, is when a good portion of it is narration.  Too many times this is the case with the 1950s science fiction b-movies.  They were often aimed at a Saturday matinee audience and, while many later became classics, most followed a tried-and-true formula.

Invisible Invaders is one of those where it was obvious that everyone involved was concerned with nothing more than punching the clock.  A thin, worn-out plot is stretched to feature length by narration and tons of stock footage while everything lumbers to a predictable finale.

When Dr. Karol Noyman (John Carradine) blows himself up while experimenting with atomic energy, his colleague Dr. Adam Penner (Philip Tonge) announces his intention to withdraw from the U.S. nuclear program as he is concerned that the experiments will only lead to the death of mankind.  However, the night after Dr. Noyman's funeral, he hears a knock at the door only to discover it is his friend returned from the grave.  In actuality, it is an alien who is using the corpse to communicate, as they are invisible, as is all their technology.  Dr. Penner is given 24 hours to convince the world that the threat is real and that all the governments shall surrender or face the destruction of humanity.

Along with his friend Dr. John Lamont (Robert Hutton) and daughter Phyllis (Jean Bryon) he attempts to do just that, with unsurprisingly negative results.  The aliens, realizing that one man raising the alarm will not do it, inhabit various corpses and broadcast their warning around the world.  When Earth refuses to surrender, the invasion begins, with massive sabotage destroying the infrastructure and armies of the dead making a formidable force.

Spirited away to a special bunker under the care of Maj. Bruce Jay (John Agar), Penner and Lamont attempt to come up with a way to make the aliens visible and end the threat before the whole world is wiped out in a matter of days.

The movie does have a few things going for it.  Unfortunately, most of that is unintentional hilarity.  I literally burst out laughing when Dr. Noyman died.  The scene plays out (with narration, of course) with John Carradine staring blankly at the camera, looking like he either just dropped a deuce in his drawers or is wondering how the hell his career brought him to this point, before a fake explosion.  For being at ground zero of an atomic blast (or even a dirty bomb blast - it's not really explained), his corpse is quite intact when the aliens show up to use it as a vessel.

Also, after all the stock footage of destruction and humanity being within hours of extinction, somehow the United Nations building comes through completely unscathed.  Not to mention the aircrash victim, who seems to fly right into an "X" on the side of a mountain.

Still, when the aliens are made visible, it is surprisingly well-handled.  While the possession of corpses was obviously a way to keep the budget down, the few times the aliens are seen exiting the bodies is not too bad.

Unsurprisingly, the actors largely go through the motions.  John Agar does the best as the pragmatic Major, while Robert Hutton plays the coward to the hilt.