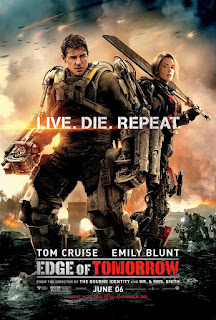 It is always interesting to see a cult film in the making.  Usually I end up hearing about films years down the road, or remembering from my childhood and wondering at the fact that they now have millions of fans despite the fact that there was largely and ambivalent attitude toward the film in the first place.

Edge of Tomorrow died at the box office.  Tom Cruise, with his Scientology and generally erratic behavior, has had a hard time maintaining his previous appeal unless he's noticeably doing a stunt that could get him killed.  Emily Blunt is a great actor, but not a big-name draw.  Add to that a horrible marketing campaign that made this look like another mindless bunch of CGI without a plot and you quickly had a disaster on your hands.  $178 million was blown on this, and it never made it back.

It didn't help that many people were confused on what the name of the movie was, especially after it came out on DVD.  The tagline, "Live. Die. Repeat." is almost as big (and sometimes bigger) than the actual title.  Many people searching for it actually think that's the name, and many rental services have had to use both names to alleviate confusion.

Tom Cruise in this case plays a very non-sympathetic character, Major William Cage, who prefers to sit behind the lines doing PR work.  When the U.S. Army puts him under the command of General Brigham (Brendan Gleeson), he is none to pleased to find out that he will be landing with troops in France in the first wave to take back Europe from alien invaders called Mimics.  Most efforts have failed, but Sgt. Rita Vrataski (Emily Blunt) was able to take out hundreds of them, leading to the first human victory at Verdun.

Cage tries to blackmail the general in order to get out of being part of the invasion, a tactic which winds up with him being knocked unconscious, dropped off at the staging area and demoted to private.  Under the command of Master Sergeant Farell (Bill Paxton), he is assigned to J Squad, with his mates being informed that his is a deserter and to treat him as such.  Barely knowing how to use his suit, he is sent into combat, only to come to the realization that enemy is waiting for them.  He, along with everyone else, is quickly overcome, but not before he kills a larger alien that looks different from the others.

After dying he wakes up back at the staging area and starts to replay the day again every time he dies.  Realizing what is happening he tries to alert Farell and his squadmates to no avail.  Finally, he lets Vratasky know what is going on and is informed to speak with her when he wakes up.  She of course does not recognize him when the day replays, but after hearing him out she has a secret of her own: she killed a similar alien, known as an Alpha, and its blood mingled with hers.  It was a similar experience to Cage's that led her to her victory at Verdun.  It also made her aware of the Omega, the commanding part of the aliens' hive mind.  Using plans drawn up by a scientist named Carter (Noah Taylor), Cage and Vratasky decide to use this advantage to track down the Omega, kill it and put an end to the war.

Surprisingly, a good portion of the money for this film went into practical effects.  The metal exoskeletons the actors wore were real, as were the explosions they had to run through - with Cruise almost being killed or injured a number of times.  The story itself was based on a manga and novel called All You Need Is Kill, and it actually provides some good reasons for why the events happen.

The biggest surprise is that the movie is actually rather good.  I say it is a cult film in the making from the fact that I would never have watched this based on the advertisements.  Instead, since this has been on cable and available on DVD and streaming services, I have constantly heard good things about it.  In most cases these days big-budget movies live or die based on early reviews, with strong opening weekends and then dying once everyone realizes they have been had.  It doesn't leave much time for a movie to gather a following like it used to, as it is typically dismissed completely once word-of-mouth kills it.

Edge of Tomorrow could have been just another Cruise paycheck like War of the Worlds so that he could get back to making the Mission Impossible movies he loves so much, but it seems like some care was put into this so that the story stood above the effects.

That doesn't mean I come away without complaints.  Too many of the action scenes with the aliens are blurry and jumbled, which is a problem with most battle scenes in movies these days.  There are some situations in which wires or CGI were used that, with all the other more realistic effects, come off as simply cartoonish.  It would also have been nice if they had been more willing to deal with an R-rating, as it seems the PG-13 was  compromise.  Also, with many sci-fi fans these days, a PG-13 sci-fi film that deals with war or violent aliens seems like a cop-out, and that just gives them another reason to stay home.

Despite its flaws Edge of Tomorrow has so much going for it that is fun to watch.  It has a great sense of humor and is one of the more memorable action films in recent years.