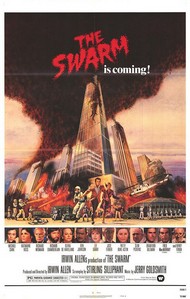 In 1978, when The Swarm was made, Africanized honey bees (sensationalized as "killer bees," but not far from the truth) had begun migrating up from Brazil into North America.  At this point they were in Mexico, and there was some debate on whether or not they would survive as they moved north.  Unfortunately, the answer to that has been "yes," as the real killer bees have managed to take hold where I live and continue to move northward into more temperate regions.

While they do kill as a swarm, repeatedly stinging victims en masse and even pursuing them over long distances, they will never reach the height of destructiveness as they do in this movie.  Instead of waiting for them to arrive, government scientists begin experimenting with the bees and, of course, they get loose.  Brad Crane (Michael Caine) is a bee expert that originally falls afoul of General Slater (Richard Widmark), whose unit was sent in to clean things up.

Enlisting his colleagues Doctors Hubbard (Richard Chamberlain) and Krim (Henry Fonda), they go in search for both a way to kill off the bees and to counteract the ferocity of their stings.  It is all to no avail, as the bees rampage across Texas and wipe out everything in their path until a last, desperate plan seemingly kills off the scourge.

If the plot sounds familiar, well, that means you have watched plenty of giant bug and monster movies from the 1950s.  You may also notice that, even with a partial list of the cast, that this reads like a number of classic actors slumming at the end of their career.  Watching the movie you kind of get that feel, but it seems it wasn't meant to be.  Director Irwin Allen, who had been responsible (as a writer and producer) for such major hits as The Towering Inferno, blew quite a bit of money on this picture.  The special effects are largely well-done and, like many '70s disaster films, it boasts an "all-star cast" that is almost guaranteed to get people into the theaters.

At this point in the game, however, American International had run the "animals run amock" genre into the ground, as had countless ripoffs of Jaws. While he was probably attempting something along the lines of Them!, Allen ended up making the equivalent of Beginning of the End, just with better effects and normal-sized insects.

The movie is a mess, with subplots appearing and disappearing for no reason (other than to give the actors some reason for showing up), and where most movies like this top out at 90 minutes, this came in just shy of two hours.  Or, if you end up seeing the extended version that is often shown these days, you're looking at two and a half hours of your time gone.

It does have a few decent scenes.  The parents being killed in front of the kid is satisfyingly brutal.  When the bees do reach Houston it is quite exaggerated but still well-done.

It never would have been a classic, but if Allen had trimmed The Swarm from its bloated running time and focused merely on the scientists trying to get rid of another deadly menace, then I would recommend this as a nice homage to the mutant bug movies of the 1950s.  As it is, be warned that this is one hard slog, even for people who love these types of movies.