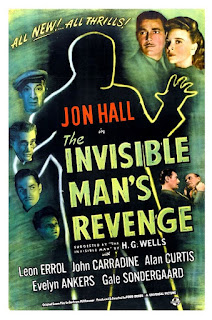 The Invisible Man Returns was a rarity in Universal monster films.  A couple of things were changed, but largely it kept a decent amount of continuity from The Invisible Man, released back in 1933.  Things even progress the same, with Vincent Price's face not being shown until the end even though Geoffrey Radcliffe, unlike Jack Griffin, survives the ordeal.  The main link between the two films, other than the invisibility, is Frank Griffin, played by John Sutton.  He is the brother of the original Jack Griffin, and thus carries on his sibling's work.
The Invisible Woman often gets packaged in with the Invisible Man series, although it has nothing to do with the rest of the movies.  Invisible Agent, released at the height of World War II in 1942 and largely being a propaganda film - although for the correct side - features a grandson of Jack Griffin, played by Jon Hall, using the invisibility formula to spy on the Nazis.  This is where it gets into typical Universal territory.  Jack Griffin died before marrying Flora, his fiancé, in the first movie.  Thus, no children and, by that stretch, no grandchildren, either.  Also, since the original movie takes place in 1933, the math doesn't add up, unless we're on a whole new timeline where the events took place in the 1890s, which was the time period for H. G. Wells's novel.
Jon Hall returns to play another Griffin - Robert - in The Invisible Man's Revenge.  Other than continuing with the last name, there is no connection at all with Jack, Frank or even the original two movies.  As the opening credits state, this movie was "suggested" by the H. G. Wells novel, which means they wisely cut him in on the movie's profits since he was still around and had no reservations about suing when he needed to.  So, even though it is a sequel per Universal, it is so in name only.
Robert Griffin stows away on a boat to London after escaping an insane asylum in Cape Town, South Africa.  Upon arriving he goes to confront Sir Jasper Herrick (Lester Matthews) and Lady Irene Herrick (Gale Sondergaard), former friends who thought he had died in the jungles of Tanganyika.  He survived and, after an accident, regained his memory.  Believing they cheated him out of his share of a diamond mine he demands that he gets his half and, when finding that they don't have it, demands everything they own, including their daughter Julie (Evelyn Ankers), who is set to wed reporter Mark Foster (Alan Curtis).
The Herricks drug Griffin and throw him out, but with the help of local ne'er-do-well Herbert Higgins (Leon Errol) he manages to get a lawyer.  When the claims turn out to be spurious he is run out of town, but not before being taken in by Dr. Peter Drury (John Carradine), a scientist working on an invisibility formula.  The doctor is eager to experiment on Griffin and, when it is successful, Robert starts to terrorize and threaten the Herricks.  Only problem is, he has to be visible to marry Julie, and the price for regaining visibility is a big one.
The problem with The Invisible Man's Revenge isn't the actors involved.  Jon Hall is suitably evil as Robert Griffin, and Leon Errol steals many of the scenes he's in.  In fact, one of the best scenes in the movie isn't even a frightening one, but where the invisible Robert helps Herbert cheat at darts.  John Carradine may be phoning it in as the mad scientist, but he still plays his part well, and the rest of the supporting cast is solid.  Being that they are supposed to play main characters Alan Curtis and Evelyn Ankers are absent for a good part of the running time.
Director Ford Beebe doesn't distinguish this movie from any other similar film of the time, and looking at his credits he mainly did b-movies, serials and later television work.  It's obvious at this point that Universal is trying to make a quick buck off the continued adoration of The Invisible Man, but unwilling to invest in a top-tier director like on the first two films.  It shows, as this has more the feeling a poverty row production than a big studio film.  Also, in contrast to the first two, this feels more stagey.  It doesn't help that the effects, though a decade down the road, don't hold a candle to the original or The Invisible Man's Return.  Too often Hall's outline can be seen.  The only times where the effects stand out are when his disembodied face appears in smoke or when covered in flour.
It is not a terrible or embarrassing film by any stretch, but at this point it's just going through the motions, which unfortunately was about the state of most of the Universal horror films from this time.  Of course an invisible man would be brought back for the Abbott and Costello pictures, but this was the dead end for serious movies involving an official invisible man until 2020, when a remake in name only was made.
The Invisible Man's Revenge (1944)
Time: 78 minutes
Starring: Jon Hall, Leon Errol, Mark Curtis, Evelyn Ankers, John Carradine, Lester Matthews
Director: Ford Beebe