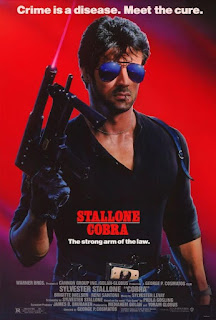 In the 1980s there were a number of huge action movie stars and everyone still has their favorites.  My two were Arnold Schwarzenegger and Bruce Willis, although I also found some of Claude Van Damme and Stephen Segall's movies fun as well.  One actor I always thought was a bit of a joke, however, was Sylvester Stallone.
That is something I have re-evaluated over the years.  Now it's more just frustration how his ego could get in the way of talent.  The man could act; one just needs to see the first Rocky film or First Blood to figure that out.  Somewhere along the line, however, Stallone let his fantasies of being an action hero cloud his judgement.  It's like he started believing his own myth.  At least after Rocky it seemed he could not let himself be vulnerable like Bruce Willis, and though he had a decent physique until he ruined it with steroids later in his career he was never an athletic fighter like Chuck Norris or Van Damme.  It also didn't help that Schwarzenegger was often easier to understand.
Despite all that when Stallone was good, even if it was just hanging around in a leather jacket and sunglasses with a match in his mouth, the act worked.  No matter what one thinks of the quality of a movie like Cobra the title character is still one of the most recognizable tough-guy cops from the time period.  It is purely male fantasy wish fulfillment for him, and a way to get out the ideas he wanted to input into Beverly Hills Cop, but it often works despite being one of the more ridiculous action films of the '80s.
Marion Cobretti (Stallone), nicknamed Cobra, is a member the Los Angeles Police Department's "Zombie Squad".  He and his partner Gonzales (Reni Santoni) often go into situations that are too dangerous for other police officers in order to diffuse them.  And, by diffusing, that often means the perpetrator is in no way fit to stand trial, and least not in a corporeal court.  Cobretti's approach is not without controversy both in the media and in his own department, and because he is a bit of a pariah no one wants to listen when he voices the concern that a number of crimes being committed around the city might be linked to the Night Slasher case and that the actual killings may involve more than one guy.
The Night Slasher (Brian Thompson) is a serial killer targeting random victims, but as Cobretti suspects he is part of a larger organization.  When one of the attacks is witnessed by model Ingrid Knudsen (Brigitte Nielsen) they track her down by her license plate, allowing our main killer to try to kill her.  His attempts fail, and when the his superiors are forced to admit he is right Cobretti and Gonzales are tasked with protecting Ingrid from what is ultimately a criminal cult that reaches all the way into the police department.
Cobra is a movie that should be like a lot of cop dramas from the 1970s and 1980s - over the top violence, gratuitous nudity, the works.  Despite looking tough and appearing that we are in for a bit of a b-movie at the beginning this is rather tame.  Originally the movie was close to two hours, had all the violence one would expect from combining a police procedural with a slasher, but it was whittled down to 87 minutes both to avoid an X rating and because Warner Bros. was hoping they could get more showings per day.  Although the movie did moderately well it still fell short of its goals.  The end result is so watered down it doesn't even have the obligatory strip bar scene that seemed to be required for an '80s cop film.
Stallone wrote the script, Stallone plays the lead and, though George P. Cosmatos is listed as the director, that was Stallone as well.  What that ultimately means is what is good here can be attributed to him (and to Paula Gosling who wrote Fair Game, the novel this is based on), but so can all the bad.  Part of that is the fact that Brigitte Nielsen, Stallone's wife at the time, is the lead supporting actress, and her acting talents have always been limited.  Despite the fact they were an item there still seems to be little to no chemistry, with the pre-requisite romance coming out of nowhere.  He doesn't even seem to have much chemistry with Reni Santoni, who is supposed to be his best friend.  He does have chemistry with his 1950 Mercury, which was a vehicle from his own collection, and I will give it to Cobra for having a great car chase - one that, again, was longer in the original version before all the cuts were made.
This is a decent '80s action thriller, and nowhere near as bad as most critics and haters of the genre would make it out to be.  I like the fact that, despite sounding like it has a complicated plot, it is a slick, stripped-down action film.  However, it fails to rise above its rote nature, and really needed everything that had been removed from the movie to at least make it noteworthy other than for a couple catchphrases.  It is still a lot of fun to watch, but there was much better at the time.
Cobra (1986)
Time: 87 minutes
Starring: Sylvester Stallone, Brigitte Nielsen, Reni Santoni, Brian Thompson
Director: George P. Cosmatos