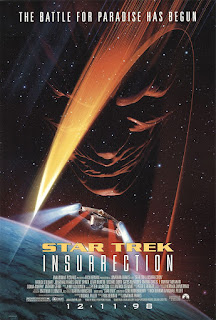 A common complaint about the movies featuring the cast of Star Trek: The Next Generation is that the films were just extended episodes with better special effects.  This is true in some cases, but fans of Star Trek are also quick to backlash whenever any of their favorite characters don't stay within character.  Star Trek: First Contact is typically acknowledged, especially by those who are not outright fanatics of the series, to be the best of the four TNG movies, as well as one of the best of the Trek movies period.  However, purists often take issue with how the main characters are written as compared to the show.
For Star Trek: Insurrection it was obviously noted that the action drew more viewers while, to keep the faithful, there had to be more emphasis on the crew that fans had come to love over seven seasons' worth of adventures.  The problem is to do this Rick Berman and Michael Piller had to shape this ninth movie so that it felt more like a traditional TNG plot.  In doing so they understandably lost many of the casual viewers they had gained with First Contact.  To make matters worse it wasn't even exactly a new plot - conflicts with the Prime Directive had been an ongoing point numerous times, as well as the morality of moving people who are "in the way" to get to the resources they have or to solve a political goal.
When Commander Data (Brent Spiner) malfunctions during an observation of a species called the Ba'ku, Admiral Dougherty (Anthony Zerbe) calls on Captain Jean-Luc Picard (Patrick Stewart) for help.  The Enterprise is diverted to the planet and they do manage to capture and repair Data, but not before the Ba'ku become aware of the observers' presence.  Rather than being a primitive tribe it turns out the Ba'ku are a group of colonists that left their own planet centuries before and resettled, eschewing technology for a more agrarian lifestyle.
What helps is that a system of rings surrounding the planet collect and inundate the planet with energy that pretty much makes the Ba'ku immortal.  The Son'a, led by their leader Ru'afo (F. Murray Abraham), have developed a way to collect the energy so it can be used for people throughout the Federation.  Unfortunately, that means moving the Ba'ku, something Dougherty and Ru'afo are prepared to use any means necessary to do so, while Picard and his team are also willing to do anything they can to save the planet's population.
So far all the TNG movies have had a major fault, and that is that there needs to be more than passing familiarity with the actual show to understand what is going on in the films.  First Contact was able to somewhat bypass this by taking time to explain Picard's past abduction by the Borg, but Insurrection suffers from the fact that it is taking place as an aside to a larger narrative arc that involves a possible invasion by the Dominion and the other situations that arose on Star Trek: Deep Space 9.  By this point the initial journeys of the starship Enterprise had been concluded for four years, and this was almost like the original cast making guest appearances to check up on what they were doing while Deep Space 9 and Voyager did all the heavy lifting.

That said it is nice to see Data get time again, as one of my few complaints about First Contact is that he was sidetracked into a secondary plot that set him up as a bit of a deus ex machina at the end.  Marina Sirtis as Counselor Troi and Gates McFadden as Dr. Crusher are still criminally underused, and unfortunately the regard that the writers have for them is seen in a comment about their boobs becoming firmer.  Jonathan Frakes as Commander Riker isn't as central to the plot this time, although his parts are essential, but it makes sense that Frakes cut his time back a bit since he was once again directing.  Levar Burton serves his usual purpose as Geordie LaForge and, while he also doesn't get as much screen time as he should, he does get a touching moment on the planet.
The guests this time that stand out are Anthony Zerbe and F. Murray Abraham as the bad guys, with Dougherty stroking his own ego and Ru'afo having his own personal reasons for draining the energy from the planet.  The Son'a are a culture that is deteriorating on the cellular level and obsessed with regaining their youth, and Berman and Piller take advantage of this to supply a bit of mild body horror.  The standout on the allied side is Donna Murphy as Anij, one of the Ba'ku who befriends Picard.
This was the last Star Trek movie I saw in a theater and, after all this time, the only thing I had remembered was Data singing Gilbert and Sullivan.  The rest of the plot and about all that happened I had forgotten, only remembering I had been quite disappointed after seeing it, especially when compared to First Contact.  Even though Insurrection still has plenty of action the problem is that the series is back to arguing moral dilemmas rather than fighting a defined enemy like the Borg, which makes for a better cinematic experience.  Also, since that moral dilemma when looked at closely may put Picard, for all his high-mindedness, in the wrong - particularly since Dougherty is right and it is questionable if the Prime Directive even applies in this case - the outcome may not be as satisfying for some.
While I still do like First Contact better, I would say Insurrection is one of the sleeper sequels and the one that truly bucks the trend of the odd movies being the bad ones.  Unfortunately that also meant that the even ones would also lose their distinction of being the best, as the last of the TNG movies, Star Trek: Nemesis, would unfortunately prove.
Star Trek: Insurrection (1998)
Time: 103 minutes
Starring: Patrick Stewart, Brent Spiner, Jonathan Frakes, Levar Burton, Marina Sirtis, Gates McFadden, Donna Murphy, Anthony Zerbe, F. Murray Abraham
Director: Jonathan Frakes