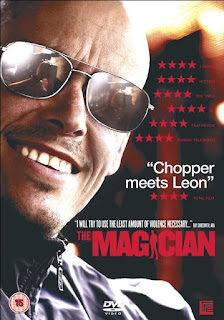 A little show that sneaked onto FX in the last couple years called Mr Inbetween caught my attention a while back.  It had a first season that generally established the characters, particularly hitman Ray Shoesmith.  The second season delved deeper into both the character and the people he surrounds himself with.  For me it quickly became one of the most interesting shows on the network.  Unlike a lot of Americans I have no problem with the Australian accents, and can get most of the slang from the context.  It is also refreshing to see a show that doesn't seem to be going out of its way to cater to an international audience.
I personally have no idea how the show is accepted in Australia.  It is obviously done on an extremely low budget, although the second season showed a little more polish, and it is the peculiar combination of comedy and brutality that Quentin Tarantino often pulls off.  The difference is that writer and star Scott Ryan doesn't seem so up his own place, and he can definitely act.  It's as if Ray is some hidden extension of Ryan, wiry and dangerous and unpredictable, but also quite human and moralistic in his own way.
The reason that the character is so well-developed in the show is that Ryan originally created Shoesmith for a microbudget film called The Magician.
Ray Shoesmith (Ryan) is a hitman.  It is never shown for whom, but he usually seems to be dealing with low-level criminals and drug dealers that have a habit of not paying their debts.  His neighbor and friend, Massimo "Max" Totti (Massimiliano Andrighetto) talks him into filming him for a student project, and tags along as Ray does his job.  The documentary style intertwines Ray dealing with an old friend named Ben (Kane Mason) whose drug habit has him in trouble with the wrong person and a journey to the middle of nowhere to pick up some cash so that one of Ray's targets, Tony (Ben Walker) can possibly buy his life back.  Throughout we learn more about Ray through one-on-one interviews with Max, and a detour to deal with Max's ex-roommate.
Many of the things that are significant parts of the show - Ray's daughter Brittany, for instance - are alluded to in the film, but not shown.  Instead we see how Ray opens up uniquely to Max, while keeping tight-lipped when asked the same questions by others.  We also get to see early on how Ray, as amoral and nihilistic as he may seem, has his own moral code.  He's not the unfeeling killer one would expect, but a person that accepts his place in the universe and is comfortable with it, whether the rest of the universe is really comfortable with him.  The only two murders shown on screen in the movie show him killing as part of his job and in what he considers as an act of mercy.
When you do a movie about a hitman but only have two murder scenes in it then there has to be something else to fill the time, as short as this movie is.  I don't know how much as scripted or improvised, but a good deal of the movie is the characters getting from one place to another, and much of it also deals with their conversations, involving current sports scandals, where to get food or, in a memorable conversation between Ray and Max, how much money it would take to get Ray to eat a bowl of excrement.  They're conversations that could be had between any group of friends, but they are often undercut by the realization that at some point Ray may be the only person walking away.
Most of the character we see in the show is there, but it is still a bit of a rough sketch.  I do wonder if there is some plan to dovetail the movie (particularly its ending) with the show, or if largely the two will continue to exist as separate entities.  But not all the credit goes to Scott Ryan here; Massimiliano Andrighetto figures out how to get the most out of his situation as both the fictional and actual cameraman.  Most of the movie is filmed during the day as the small crew obviously did not have a lighting rig, but the few night shots that are needed are blocked so that streetlights or car headlights do the job needed.  The entire conceit of the mockumentary may be overused, and I was wondering how it would be slipped into this in any convincing form, but it works.
I do have to say I probably enjoyed the movie better because of being familiar with the television show, so even though I highly recommend it, I do recommend checking out Mr Inbetween first.  That will give you some indication of what to expect.
The Magician (2005)
Time: 85 minutes
Starring: Scott Ryan, Massimiliano Andrighetto, Kane Mason, Ben Walker
Director: Scott Ryan