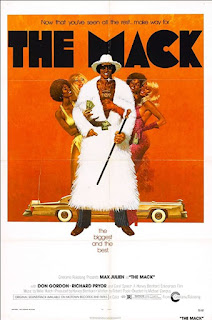 I am obviously not African-American.  That does make it hard when reviewing some movies that were never specifically made for mainstream distribution.  While movies like Shaft and Superfly were definitely written and directed with a black gaze, in the end they were still traditionally filled with good guys, bad guys or, at the very least, anti-heroes one could cheer for.  Two different audiences would get two different experiences, but either way it was largely what the makers of the movie wanted to do.

That's why blaxploitation is such a weird word to use for an entire genre of black film making in the early 1970s.  What may on the surface appear as exploitation of some of the more negative aspects of black American culture was, in some ways, trying to explain why these negative influences were somehow twisted into positives for many in the urban community.  It is something that, even though my background is certainly not affluent, is still way beyond my experience or understanding.  Yes, we have had our anti-heroes, going back to the highwaymen of legend and some of the "gentleman thieves" of the 19th and 20th centuries, but at least in this country white people have never truly been forcibly separated and put in a situation where everyone, from your own people to the people under whose boot you existed for centuries, is constantly shouting contradictory advice.

Within that advice, though, is one constant - money.  While education, athletic prowess or finding a way to entertain others are all touted as positive ways of escaping the ghetto, they are all means to an end, and that end is making money, and to that end any means are presented as acceptable.  The only thing I have read similar, and even that world is just as alien to me, is in the book Wiseguy (which was adapted into Martin Scorsese's classic film Goodfellas).  In the end it boils down to getting as much as you can before you either end up dead or are able to make a break for it and never look back.

The Mack may seem like a glorification of pimp culture, and certainly many elements of the movie have been used to do so over the years.  Written by Robert J. Poole, largely while in prison, and filmed in areas of Oakland, CA that at the time were controlled by the conflicting powers portrayed in the movie, The Mack was made for a specific audience and has resonated throughout the years because of it.

In 1967, Goldie (Max Julien) is arrested by corrupt cops Hank (Don Gordon) and Jed (William Watson) after a robbery gone wrong.  After serving his sentence, Goldie returns to his Oakland neighborhood, where he is set up in the pimp business.  As he becomes successful he becomes a target of a number of people: the cops that arrested him, his old boss Fatman (George Murdock) and rival pimp Pretty Tony (Dick Anthony Williams).  He also finds himself in conflict with his brother Olinga (Roger E. Mosley), a black revolutionary working to get people like Goldie out of the neighborhood.

It's a simple story, and there is not much in the way of progression other than seeing where Goldie's life decisions eventually get him.  It doesn't go in for moralizing, although there are some well-done scenes that represent Goldie's personal moral conflict.  In the end, though, he understands that he has set himself on a road and he continues on it until the end.

Despite the fact that director Michael Campus was working on a shoestring budget, he had the benefit of Max Julien portraying Goldie.  Julien, a classically trained actor, plays Goldie as generally soft-spoken and welcoming, but quick to suddenly switch gears.  Importantly, it doesn't feel like he's acting the part; when he says some of the classic lines from this movie, you believe it.  Goldie is a man you would definitely not want to get on the bad side of, especially since throughout you see him playing the long game.  There is a reason a good portion of the last act isn't too different from The Godfather.

This also features an early performance from Richard Pryor as Goldie's sidekick Slim.  From what I have read about the production of the movie, it is hard to tell where Pryor was acting or where he just showed up and started acting like he does on camera.  He was a mess at the time, but this role still managed to open the door for him to re-enter Hollywood, most notably for co-writing Blazing Saddles with Mel Brooks.  The other actors are largely reliable - Don Gordon plays white villains in a number of blaxploitation films, and was a well-used character actor throughout the 1970s and 1980s, while Roger P. Mosley had his own career in other blaxploitation films as well as on television.

Julien, of course, went on to write Cleopatra Jones and to star in (and write) a number of other films that are rarer examples of the genre.  If the blaxploitation genre hadn't come to a premature end he undoubtedly would have made his way into the mainstream eventually.

As for the movie itself, its influence on hip-hop culture and African-American street culture cannot be underestimated.  As a film, though, it doesn't seem to really start coming into being its own thing until about a third of the way through, and even then the improvised mature of many of the scenes seems to make it seem more like a series of sequences in a partially-finished film that somehow has been assembled into something that makes sense.  Both Julien and Pryor received some behind-the-scenes credit for contributing quite a bit to the movie that expanded on Poole's script.

Still, the action sequences are well-done, and the Players' Ball portion is an unforgettable moment, with the outrageous costumes and groovy music.  It was also parodied in one of the most memorable scenes from Keenan Ivory Wayan's blaxploitation satire I'm Gonna Get You Sucka.  Once things do get going you feel more like an observer of events as they play out to their end.  There is really no one to root for as such, as all sides (except for Hank and Jed, and perhaps the exploitative Fatman) are played as morally ambiguous.  In the end there is still a message that maybe the ends do not justify the means.  Certainly, the man the movie is dedicated to, Frank Ward (who has a cameo during the Players' Ball portion, along with his brothers) having been shot and killed during the making of the film says more about the lifestyle than anything else.  He and his brothers were the reason the film crew could film in the area unmolested, and Max Julien based Goldie's character on Ward.  Like Scarface, another movie that has had a heavy influence on African-American culture, little is ever said about the end result.

In the end it is all about getting as much cash as possible, regardless of the results or those that are left in your wake.  The irony is that once you reach a certain level in life, it seems that the situation is just the same as when you are at the supposed bottom - I really can't see Gordon Gekko's behavior is really any different than Goldie's.  Despite its episodic nature and pacing problems, The Mack is worth the time, as there is so much more the movie has to say about the world we live in, even if the world it takes place in, one just right next door, is one which is completely alien to the majority of the country.