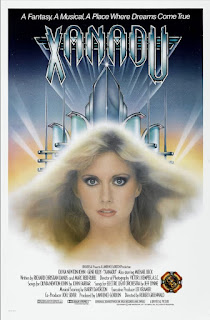 Over the last few years I have been co-hosting Face the Music: An Electric Light Orchestra Song-by-Song Podcast.  It is exactly what it sounds like.  Unfortunately, there was a place I had never dared to go, and that was to actually see the movie Xanadu.  I always liked ELO's contributions to the soundtrack, and "Magic" isn't a half-bad song even if, like me, you're not an Olivia Newton-John fan.  Still, I never had a desire to suffer through this movie..

Then again, there are bad movies out there that are extremely entertaining.  Numerous cult films, as I have undoubtedly stated before, have certain elements that overcome them being merely bad.  While they may not be what critics or mainstream movie-goers wish to see, they still have sparks of genius the show through and help carry the film.

Xanadu is not one of those.  It has its own small cult following, and understandably has some fans in the LGBTQ community, but there is are a number of reasons why something as outrageous as The Rocky Horror Picture Show got the attention it did, while Xanadu just flopped.

Sonny (Michael Beck) is a frustrated artist working for a big record company.  His job is to paint large billboards of album covers to be placed as advertising in stores.  His boss Simpson (James Sloyan) doesn't like him due to the fact that he adds his own touches to the artwork, but tolerates him anyway.  One day on the way to his job a mysterious lady on roller skates (Olivia Newton-John) gives him a kiss and then takes off.

After seeing her appear in a photograph for a record album he has to paint Sonny goes searching for her.  He does run into her, but more importantly he runs into an old big band musician named Danny McGuire (Gene Kelly), who used to own a bar back in the day.  McGuire takes a liking to Buddy, eventually taking him on as a partner in order to open a new nightclub called Xanadu in an abandoned auditorium that the young lady, whose name happens to be Kira, uses as her private roller rink.  Kira herself happens to be a Muse come to help Sonny follow his dreams, but the two, despite the fact it's not supposed to happen, fall in love.

One of the core problems with Xanadu is that it was meant to cash in on the roller disco fad that, by the time the movie appeared, had completely disappeared.  A movie the previous year, Roller Boogie, had also tried to cash in on it while it was still halfway relevant, and failed even worse than Xanadu.  It didn't help that disco itself was dying amid a backlash as new wave and synthpop started to take over the mainstream pop charts.  Despite including a performance by the Tubes the movie was dated by the time it was released.

It also ended up with a muddled plot line since, at its inception, it was a remake of a movie called Down to Earth.  Down to Earth had been the sequel to the original version of Heaven Can Wait, which was remade with Warren Beatty in 1978 and became a decent hit.  The sequel to the original had a muse, sent by a guardian angel, to help a young man start up a successful nightclub.  At some point, since everyone wanted the spotlight to be on Olivia Newton-John, the guardian angel was written out and any reference to Beatty's film was erased.

Another major problem are the leads.  Michael Beck sleepwalks through the film, while Newton-John flits around on roller skates, dances a little sings her numbers.  Unfortunately, she is without dimension when it comes to her role, except in a few scenes with Gene Kelly.  I blame her less than I blame the character of Kira being written with even less care than the manic pixie dream girls that would inhabit films a decade later.

As for Gene Kelly, one would expect him to phone this in, since this was the last movie of his career and he largely agreed to do it since the filming locations were in walking distance of his home.  Strangely, he seems to be the only person in front, or behind, the camera that seems to care what is going on.  There is a marked difference between the scenes choreographed by Kelly and those done throughout the rest of the film; in fact, we get a touching memory of a woman who may, or may not, have been Kira back in McGuire's heyday, and some wonderful acting from him.  No matter what scene he is in he shines, even when he's stuck going around on roller skates.  If he had been at the heart of the movie it may have been much different.  As it is, he has one of two good scenes, the other being an animated sequence to the tune of ELO's "Don't Walk Away", put together by Don Bluth at the last minute as a filler piece.

As for the majority of the musical numbers, they run from bland to outright embarrassing.  Electric Light Orchestra's music is largely wasted, with the famous scene of the muses coming alive in a mural and jetting around Los Angeles (set to "I'm Alive") being largely out of synch to Jeff Lynne's music, to "All Over the World" being used in a horrible shopping sequence.  "Don't Walk Away" and "The Fall" are the only ELO songs used in a decent manner.  They back Olivia Newton-John on the title track, which makes up the long dance number at the end, but even then that song is constantly interrupted by different scenes that do not even make sense in the context of a musical number.  As can be expected Olivia's songs are integrated a bit better, but are still relegated to background (like in the case with "Magic") or sung as a soliloquy.  The less said about the battle between the 1940s and the 1980s the better.

All of this could have been overcome.  Rocky Horror drags toward the end as well, but still has enough going for it in the first two thirds to overcome the whole "Floor Show" part.  Xanadu, on the other hand, spends most of its time building up a cliched love story.  The biggest crime the movie commits is that, for all the glitz and attempts at building up something big, it is boring.  There is absolutely nothing to keep someone coming back for regular viewings, and the few good scenes can be found on YouTube without having to sit through the rest of the movie.

Xanadu cost 20 million dollars in 1980.  That's still not anywhere near (even adjusted for inflation) the amount blown on the recent disaster that was Cats, but it was still a hefty amount for the time and for a movie that was meant to exploit a fad.  Roller Boogie may not have been a giant hit, but it was making a profit off of a virtually non-existent budget and the hopes that people would want to see what Linda Blair was up to.  There was no way, even with Olivia Newton-John's involvement, that Xanadu was ever going to see its budget back, especially since musicals had been out of style for decades.

Where it did make money in the end was the soundtrack.  Separated from the movie the Electric Light Orchestra side of the album (and this even includes the theme song) is all strong material, while even the Olivia Newton-John side is not horrible.  Both of them were major stars at the time, and this was not the first (or last) film in which the music could be better enjoyed if the movie was ignored.  Both artists went in different directions after this, with Olivia belatedly trying to erase her little girl image with "Physical" and ELO revamping their sound for the '80s on the underappreciated Time.  Happily, ELO itself never appeared in the movie (by all accounts Jeff Lynne has never even seen it), thus keeping them safe, and the hits off the soundtrack helped keep this from destroying Olivia's career, even if changing musical times would end up affecting both not too long afterward.

Xanadu fails at so many things at once that it just sort of sits there, begging to be liked.  Unfortunately none of this ever comes together, either in a good way or an extremely entertaining bad way.  Rather, it's kind of like a can of cranberry sauce.  It flops out on the plate waiting for a few curious people to taste it and see if it's as bad as they remember.  Once they realize it is, they just walk away, without comment, as even in being bad it is unremarkable.