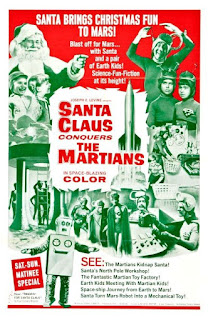 Besides bringing us the collective works of Coleman Francis, Mystery Science Theater 3000 is responsible for bringing a number of movies to public awareness that would have been forgotten or lost.  Often those that made or starred in them might have preferred that had happened, but some, like Manos: The Hands of Fate, have become underground classics.

Santa Claus Conquers the Martians was already pretty much known as a bad Christmas/science fiction mashup long before MST3K, largely due to the books published by Michael Medved going over the worst movies ever made.  Although in public domain, it took the interest of the Misties (much like another maligned Christmas movie, Santa Claus) to bring it back to the awareness of the general public.  Among all the Christmas specials that used to play in December I can definitely say that this was not among them.

It is a bit surprising, since by all accounts the movie didn't do that bad on initial release, especially considering that it was made on a shoestring budget and was largely aimed at the 10-and-under demographic.  Also, despite its reputation, I can definitely say I have seen much worse, both from science fiction around the same time and from holiday movies in general.

Martian leader Kimar (Leonard Hicks) and his wife Momar (Leila Martin) are concerned that their children Girmar (Pia Zadora) and Bomar (Chris Month) have lost all interest in eating their pills or doing their studies.  They are also having trouble sleeping.  Their main interest seems to be watching broadcasts from Earth, particularly as the holiday season is in full swing and Santa (John Call) barely has time during his busy schedule to give television interviews.  To find out what is wrong, Kimar takes his advisers to see the 800-year-old sage Chochem (Carl Don) who informs them that the kids of Mars need Christmas as well.

Instead of a logical progression of thought, Kimar's first idea is travelling to Earth to kidnap Santa Claus.  The whole thing is opposed by his councilor Voldar (Vincent Beck), who prefers things as they are.  Still, he accompanies the group to Earth where, in addition to Santa Claus, they also end up bring back siblings Billy (Victor Stiles) and Betty Foster (Donna Conforti).  Santa and the children quickly befriend the not-so-bright Dropo (Bill McCutcheon), known as being the laziest man on Mars, and who stowed away on the trip, but find themselves at constant odds with Voldar.  When they get back to Mars, hijinks ensue and, in the end, everyone gets a lesson about the true meaning of Christmas and about how important it is to let children be children.

I always say that to be a decent cult movie, whether originally made for children or adults, there has to be at least one moment that makes you stare at the screen in utter disbelief.  There is a scene in The Expanse where the Belters, after the attack on Ganymede, take a chance to get revenge against inhabitants of Earth and Mars by committing a heinous crime.  There is a discussion by Garibaldi on Babylon 5 about how people should not joke about sending people out an airlock.

So, of course, in this wonderful children's film, Voldar attempts to send Santa, Billy and Betty out into space through tricking them into the airlock.  He's not just some grumpy Grinch stand-in to get his comeuppance, but willing to commit outright murder using a method that is torture (hint: you don't instantly die in vacuum - you get a minute or two enjoy what is happening).  Luckily, they get out of it in a nice Santa-like way, but with Dropo constantly acting like his mother snorted too much Plutonian nyborg while she was pregnant with him, and all the other humor and whimsy that seems aimed directly at very young kids, this completely comes out of nowhere.

As for the rest of the movie, it is cloyingly sweet.  It's not badly acted as much as it is badly plotted; everyone involved were stage actors, the sets were built as best as the budget would allow and director Nicholas Webster had experience directing for television so, unlike a number of bad movies, we're not looking at a bunch of people who had never picked up a camera or a script simply working on hubris or trying to win a bet.  Webster's direction may not be too inspired (it looks like it could have been made for television), but it's serviceable.  The kids, both from Earth and Mars, are nowhere near as annoying as those in some of the more popular Christmas films.  Everyone, especially John Call getting to play Santa, seems like they were having a blast making this.

That doesn't mean its reputation isn't earned.  The green paint on the Martians (Webster somehow scraped enough money together to get color film) often seems about to rub off and, like a lot of cheap sci-fi of the time, it is filled with stock footage and library music.  The stock footage is largely there to fill in events that were completely outside of the budget but, most importantly to pad the movie out beyond the hour mark so that theaters would run it during their matinees.  It is much too saccharine for many adults to sit through, which again makes the attempted spacing all the more jarring.  There is also an hilariously inept scene involving a polar bear, which is obviously some poor guy in a home-made bear suit.

I will admit I did think they did a good job with the sets they did make, with many of them having that Atomic Age look that was the rage in the 1950s.  Too bad the Martians ended up with dishwasher parts on their heads, but it seemed like there was at least some attempt to build some history and culture of the Martians - even if, conveniently, their spoken and written language is English.  The other completely strange moment in the movie, and a pretty good one to boot, is the meeting with Chochem in one of the few scenes outside the main enclosed environs of Mars or the space ship.

As with many movies featured on MST3K, one of the main concerns is whether or not Santa Claus Conquers the Martians can be enjoyed without the jokes, skits and commentary.  As much as one will be cringing at some the more syrupy parts, or especially the "Hooray for Santy Claus" theme song (sung by children just to double the pain), it is still amusing to watch.  I don't know if I would sit a child down in front of it, as I think most children today would be bored to death, but it is fun in its own strange, playful way.