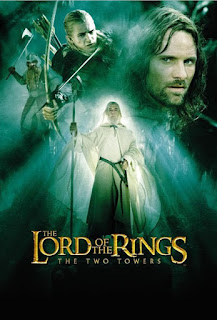 With everything set up and ready to go with The Lord of the Rings: The Fellowship of the Rings, Peter Jackson got into the meat of the story with The Two Towers.  It is obvious filming the way he did presented challenges, but it was good that he did - J. R. R. Tolkien, after all, wrote the whole thing as one grand epic, and divided it where it needed to be.  That is why it frustrated me when Fellowship originally came out and there was complaining about where it ended.  It was almost as if many viewers didn't know it was a book series divided up in specific places to make sure each one told a significant part of the story.

While George R. R. Martin, and HBO's adaptation of his books in the Game of Thrones series have certainly tried to emulate this (taking the battle of Helm's Deep from this part of the story as inspiration for its many battles, both in the book and on TV), The Lord of the Rings has benefited from being a complete work from its beginning.  While a bunch of naysayers were complaining that all the story was about was a bunch of people walking from one place to another, it became quite clear in The Two Towers that even though Frodo and Sam's journey into Mordor is central to ending Sauron's reign that there is much more to the world of Middle Earth than two Hobbits.

We begin with Frodo (Elijah Wood) having a vision of the continuation of the battle between Gandalf (Ian McKellan) and the Balrog.  He and Samwise (Sean Astin) have become lost on their way to the Black Gate of Mordor, but they find an unexpected guide once Gollum (Andy Serkis) makes his presence known.  Sam doesn't trust the creature at all, but Frodo, as he becomes increasingly weighed down by the burden of carrying the One Ring, forms an uneasy bond with him.  They also run into another barrier to their journey when they encounter the armies of Faramir (David Wenham), the younger brother of Boromir, who is just as intent on bringing the ring back to Gondor as his brother was.

Meanwhile, Pippin (Billy Boyd) and Merry (Dominic Monaghan) are in the captivity of the Uruk-Hai and are being taken back to Saruman (Christopher Lee) in Isengard, as the orcs think that they are the ones carrying the ring.  They are able to escape and find an unexpected new ally in Treebeard (John Rhys-Davies), an Ent (largely a walking, talking tree) that is concerned with the damage being done to the old forest that he tends.

Aragorn (Viggo Mortensen), Legolas (Orlando Bloom) and Gimli (Rhys-Davies) continue on their own way, eventually discovering a delightful surprise: Gandalf has returned, but in a form meant to assume Saruman's position due to the latter's corruption.  Together they try to enlist new allies in the Riders of Rohan, only to find that their Theoden (Bernard Hill), their king, has fallen under Saruman's spell due to the machinations of his adviser Grima Wormtongue (Brad Dourif).  Gandalf helps bring Theoden back from the brink, but with Wild Men and orcs encroaching on Rohan's territory Theoden decides to evacuate his people to the defensive castle of Helm's Deep, an impenetrable fortress that has served them well in the past.

While Fellowship was not lacking in grand set pieces, The Two Towers outdoes it every way, from the iconic Battle of Helm's Deep, in which a small host of men and Elves struggle to fend off a force of 10000 orcs and Uruk-Hai loyal to Saruman, to when the Ents finally become enraged enough fight back for their land.  Especially the former is an amazing sight, as even in 2002 most directors would have had the effects department copy and paste the army, it is instead largely made up of extras, all wearing unique armor and insignia.  While CGI is used extensively throughout, it is again used like in Fellowship to flesh things out rather than be the main focus, as stuntmen, miniatures, matte paintings and practical effects are used well enough that the world never seems artificial.  There are some obvious green-screen effects at times, largely while Pippin and Merry are riding on Treebeard, but the most important parts are largely seamless - the main, and most important one, being Gollum, who to this day remains one of he few computer-generator main characters that doesn't come across as an annoying cartoon.

Dividing the company up also allows us to get to know everyone separately.  Merry and Pippin become less side characters and more vital to the cause.  We also meet Eowyn (Mirando Otto), King Theoden's niece and a possible rival to Arwen (Liv Tyler) for Aragorn's affections.  In the books Eowyn is much more fleshed-out than Arwen, so it is a little disappointing to see her a bit more waiflike in the movie when she (and other women of the Rohan) were often portrayed as being almost equal to men as warriors.  Still, she's a welcome addition, as are all the riders, as they are one more facet to the world that Frodo and Sam are tasked with saving.

I have few complaints about The Two Towers, other than again you really need to see the extended edition to really experience it as it is meant to be, although the theatrical version is worth seeing if that is what you prefer.  Beyond that, I find that Saruman, even in the extended version, is two often
a background character in this, but even in the books, unlike Gandalf, he never stood at the head of an army himself, preferring to guide things from his tower in Isengard.  Some may be overwhelmed by the amount of characters introduced at this point, but their introduction is paced so that we get to understand their importance in the story.

No matter how much other fantasy movies try to copy it, I doubt we'll ever see anything like Helm's Deep staged again, especially since it is not meant to show the glory of battle but rather the price.  Since the story continues and doesn't end with Saruman and Sauron shaking hands over the corpses of our heroes, I don't think it's a spoiler to say which side comes out victorious, but it is relief at surviving and finding that loved ones have as well rather than glory that they feel in the end.  Tolkien himself was no stranger to the horrors of war, and Jackson does a good job of translating this and not letting it turn into empty spectacle.

That is still what sets this series apart from others, including the Hobbit movies that Jackson followed these with: it's great storytelling from the source, and Jackson puts his own stamp on it, but it is much more than just spectacle.  There is an emotional and visual poetry to all three films, and while Fellowship often looked like it painted Middle Earth in watercolors and oil, The Two Towers begins to give it a foundation of soil and blood.  It is a perfect set-up for the trials to come.