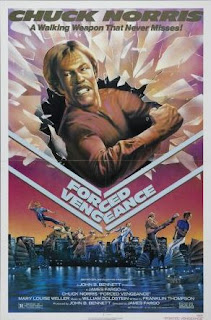 With all the jokes that still go around about how Chuck Norris can largely destroy about anything in his past, it's hard to believe that, as of writing this, he is 79 years old.  It is also hard to believe that I have seen very few of his films.  I learned early on that Norris, at least when younger, could hardly deliver a line without it sounding like he was reading directly from a cue card.  When you're young and caught up in "artistic integrity," that is something that automatically becomes the focus rather than just the fact the guy made fun movies in which he, believably, kicked every bad guy into oblivion.

It's also important to remember that while Arnold Schwarzenegger went into politics, Sylvester Stallone into bad comedies, Steven Seagall into an ego-induced career coma and Jean Claude Van Damme into being a parody of Jean Claude Van Damme, Norris moved to television once his movie career started winding down and dealt with bad guys as Walker: Texas Ranger.  While he may only have had a brief cameo in The Expendables 2, it was more memorable than the rest of the movie.

So I think it is time to give Mr. Norris his due, and it appears I found a good place to start with one of his earlier films.

Josh Randall (Norris) somehow wound up in Hong Kong after Vietnam, and eventually made friends with Sam Paschal (David Opatoshu), another expat who happened to run a casino called The Lucky Dragon.  Randall works security for the casino, now run by Sam's son David (Frank Michael Liu) while Sam enjoys retirement.  It's a good life, but things go south once Sam refuses a buyout offer from shady casino owner Stan Raimondi (Michael Cavanaugh).  Sam and David are killed, and Josh is on the run.

The sole remaining owner of the casino, Sam's daughter Joy (Camila Griggs), is more interested in partying than dealing with her father's business, but immediately becomes Raimundi's next target.  The price on Randall's head also puts his girlfriend Claire (Mary Louise Weller) in danger.  Still, despite Raimondi's people being literally everywhere, Randall still has friends in his old army buddy LeRoy (Bob Minor) and Inspector Chen (Lloyd Kino), who is trying to bust the head of the organization that Raimondi belongs to.  Still, in the end, it is up to Randall to overcome several tragedies to work his way up the food chain and bring the organization down.

It's a simple enough plot, and it works to string together a number of action scenes, many quick and brutal - which I admire.  I have seen some people claim it's sloppy, but it looks much more realistic than wire fights.  I love those as well, but highly choreographed fights would have done nothing for this film.  Besides, director James Fargo is able to film stylized fights quite well; the scene of Randall dealing with an assailant, with and the other fighter silhouetted against a neon sign, is beautifully done, as is the inevitable fight with Raimondi.

The other thing Fargo does is move us through a city that suddenly has become completely hostile to our protagonist.  It's a place he knows, but has suddenly become foreign to him as Raimondi uses his power to have every two-bit thug track and attack Randall, and we follow him through the streets and back allies of various parts of Hong Kong.

While Norris, as usual, sounds like he's doing an initial line reading (and the cheesy inner narration doesn't help), I did notice something I should have a long time ago.  While he's not a good dramatic actor by any stretch of the imagination, physically he is great.  He is able to communicate so much just by his stance or by a glance.  Since, unlike many Americans who made martial arts movies, he actually is a martial arts expert, the control he exerts while fighting extends to all parts of his body and gives him an undeniable presence.  And, to be honest, I can't really see someone being able to deliver some of the lines in this movie in a convincing manner.

Neither Bob Minor nor Lloyd Kino get enough screen time, although Minor's time is rather heartbreaking.  Michael Cavanaugh wisely amps up the villain position, as it is the type of bad guy performance a movie like this needs.  He also makes himself a believable challenge to Norris in their final fight - no mean feat when you consider the henchman at the end.

Forced Vengeance without Chuck Norris would be another cliched, barely enjoyable Death Wish ripoff, but his involvement elevates this more than one would expect.  I would say just that fact says a lot about why he was one of the major action film stars of the 1980s, and why his career never really petered out like some of the others.