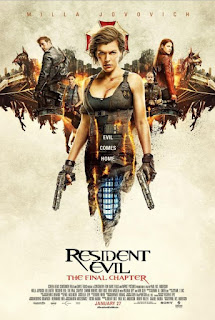 I recently read an article on Cracked that stated that no matter how you feel about Paul W. S. Anderson's films he has a knack of filming spooky corridors.  So, of course, as I finally reach the end of the Resident Evil series, I find myself looking at corridors, hallways and passageways.  And, lo and behold, that laser corridor from the first movie shows up once again.

This leaves me tempted to speak about the passage of time between the first and final movie.  About the twists and turns through which this corridor has led us.  I guess I could say I have been in it for the long hall.

But that would leave me negating the fact that, as good as this is for the end of this expensive (and successful) string of b-movies, that reaching the end of the line once again exposed a number of the frustrations that have popped up throughout the entire series.  On top of that there are plenty of problems this time around as well, not least that it looks like it was edited by a hyperactive five-year old with his first pair of safety scissors.

At the end of Resident Evil: Retribution we were promised a grand battle.  Alice (Milla Jovovich) and her rescuers make their way back from Kamchatka to Washington, D.C., where Albert Wesker (Shawn Roberts) has gathered most of humanity for a last stand against the undead and other creatures (including flying monstrosities) controlled by the Red Queen (Ever Anderson).  Apparently Alice was given back her powers, and the two former enemies are prepared to join forces for the common good.

Well, forget all that.  We never see the battle, but we do see what D.C. looks like two weeks later when Alice is the sole survivor.  After dealing with one of the winged creatures, she finds a bunker where the Red Queen contacts her.  Apparently Wesker faked giving her back her powers and betrayed everyone.  The Red Queen's programming will not allow her to kill Wesker or Dr. Isaacs (Iain Glen), who has become a sort of apocalyptic cult leader.

A word on that - the Dr. Isaacs that used the virus on himself (the virus that was supposed to turn zombies human again, not the T-virus) and was killed by Alice in Resident Evil: Extinction was a clone of the real Dr. Isaacs.  He just didn't know he was a clone, since the clones need to think they're the real thing in order to function properly.

The Red Queen informs Alice that she needs to get back to the Hive in Raccoon City within 48 hours or the remaining 4500 human beings, scattered in settlements across the Earth, will die at the hands of forces controlled by the Umbrella Corporation.  Alice hustles to get there in time, getting captured by Dr. Isaacs at one point and also encountering a survivor settlement in Raccoon City itself where Claire Redfield (Ali Larter) has settled with others that were originally captured from the ship.  Their transport crashed, and they have been eking out a living on one of the city's devastated skyscrapers.

It turns out that there is one vial containing an antivirus that will kill everything infected by the T-virus, which, after the initial contamination in the Hive, was purposely released by Umbrella so they could repopulated the world with a chosen few.  Naturally, Isaacs and Wesker do not wish Alice to get her hands on it, while the Red Queen is doing what she can to make sure she does.

For anyone who even knows the basics in chemistry and the way airborne viruses and chemicals work, there is a big red flag.  One vial is supposed to broken in an East Coast city (it's been hinted that Raccoon City is a stand-in for Pittsburgh, or it may just be that is because some exterior filming in previous films was done there) and magically pass around the entire world to get rid of the undead and all the other biohazard creatures.  In reality (something that is not on the chemtrail conspiracists' side) airborne distribution is nigh impossible due to how easily it dissipates.  Still, this is the plan, and to the movie's credit it does halfway take this reality into consideration at the end, almost as if someone raised their hand at the last moment to bring this fact up to Mr. Anderson.

Since I never really watched Resident Evil films for their basis in science, I'll instead move on to what these movies do best: set up grand action scenes, using real stunt work, while presenting us with interesting monsters pulled from the video games and occasionally Anderson's imagination.  The initial fight with the Jabberwocky at the beginning is as exciting as anything in the previous films, and we get a decently filmed martial arts match between Alice and Commander Chu (Joon-Gi Lee), one of Isaacs's goons.  The fight between Isaacs's forces, an army of the undead and the survivors in the tower is visually stunning as well.

Which leads me to the question of why they had to go and edit the hell out of it.  Someone can barely turn their head without a cut shot.  Anderson filmed most of the film with a hand-held camera, but he did a good enough job to where it doesn't look like a shaky-cam found footage film.  So, again, why let someone butcher it like this?  It makes absolutely no sense, adds no excitement or urgency to the proceedings, and just has the viewer repeatedly going, "Hey! I was looking at that!"  It's like the visual equivalent of brick-wall mastering in music.

Milla Jovovich is comfortable enough in this role that she has no problem carrying the entire movie.  As usual, Ali Larter is here to help kick butt, however she still doesn't get any more or the bare-bones dialogue than most of the hero characters.  Anderson is decent in writing quips for his wife to say or the occasional clever sneer from his villains, but rarely even bothers to stretch his characters into a second dimension, much less a third.  All the heroes this time around, save Redfield, are largely treated the same way as teenagers in a slasher film anyway.

As for all those characters introduced in Retribution?  Forget about them.  They all die off-screen like so many characters in this series. Since this is supposedly the last one, chances are slim we'll see them return in clone or mind-controlled form like so many before them.

With Wesker betraying Alice, one of the most recognizable villains in the series is given much less to do.  It would have been much more interesting to see Wesker truly ally with Alice against Isaacs, as it would have been a good idea for us to at least see the battle that was promised at the end of Retribution.  Resident Evil: The Final Chapter, though still an exciting and watchable film, does its job of tying everything up and giving us some great action sequences, but given that it is the last one more care should have been taken to make sure it was undercut by amateur mistakes.