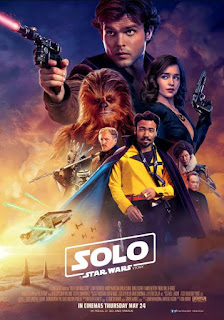 I sometimes do not know who is trying to kill the Star Wars franchise faster: Disney, who currently owns Lucasfilm and the rights to the series, or its so-called fans.  When I say Disney, I don't mean the usual complaints that people have of politically correcting the series; I loved The Last Jedi, and am happy to defend it both from those who have a knee-jerk reaction whenever they see a movie has a female lead and the rest who get upset because their fantasies they had playing with toys 40 years ago never made it to screen.

But Disney really needs to figure out what it wants to do with this series, and with the anthology movies it wants (or wanted) to produce alongside the main saga.  What I loved most about The Last Jedi and Rogue One is that, even though they fit within the timeline that was retconned by the prequels and Lucasfilm, they still went in directions that were not expected.  One of the main complaints with The Force Awakens was that it took no chances, even repeating plot points from the original film.  It surprised me that Disney would allow the changes in tone that came after it while reacting to Christopher Miller and Phil Lord as if they were committing some sort of blasphemy, plastering the problems with making Solo all over the internet.

Ron Howard was brought in to finish, but Disney may as well have marched Solo naked through the streets of King's Landing with Kathleen Kennedy ringing the bell, yelling "Shame!"  It didn't help that trailers for the movie were underwhelming and that the movie was released too soon after The Last Jedi.  If Disney had given the neckbeard brigade a year to calm down things may have gone better, but instead Solo became a whipping boy, and it felt almost as if it was purposely thrown out there to be such to protect episode 9 when it comes out at the end of 2019.

That is quite the shame, as Solo: A Star Wars Story, unlike Rogue One, was supposed to kick off a separate trilogy.  That, and the future of seeing future spinoffs (which have refreshingly given us a larger glimpse of the Star Wars universe beyond good and evil space wizards), is now up in the air.  Still, Solo is good enough that many fans are realizing that paying too much attention to a small, vocal group that wanted to get back at a giant corporation over a bunch of imagined wrongs robbed many of seeing one of the better movies of 2018.

Han (Alden Ehrenreich) is one of many children living on the streets of Corellia that have been kidnapped or coerced by Lady Proxima (Linda Hunt) to feed her crime empire by robbing the citizens that live on the dingy ship-building planet.  One day Han botches a robbery of coaxium (a fuel used for hyperspace flight) and steals his marks' landspeeder.  The little that he was able to steal he means to use to get himself and his girlfriend Qi'ra (Emilia Clarke) off the planet.  Things don't go as planned, and Qi'ra gets left behind while Han evades capture by signing up to become an Imperial pilot.

His attitude ultimately gets him kicked out and stuck in the infantry.  He runs into a group of thieves led by Tobias Beckett (Woody Harrelson) in the middle of a war zone, and attempts to join them.  He is at first outed as a deserter by Beckett, but that just leads Han to rescuing a Wookie named Chewbacca (Joonas Suotamo).  The two join Beckett's gang, who plan to use a stolen transport ship to boost a shipment of coaxium from an Imperial transport train.  The results don't go as planned, largely due to an attack of pirates led by Emfys Nest (Erin Kellyman) and Han's refusal to let everyone die.  This makes no difference to Dryden Vos (Paul Bettany), the Crimson Dawn crime lord that Beckett was doing the job for.

It also turns out that Qi'ra ultimately made it off Corellia, but has become Vos's right hand.  Han comes up with an idea to still deliver the promised coaxium by stealing an unrefined amount from a mining colony on the planet Kessel and, with the help of smuggler Lando Calrissean (Donald Glover) and his droid L3-37 (Phoebe Waller-Bridge), the group manages to do the legendary Kessel Run that is mentioned in Han's first encounter with Luke Skywalker and Obi-Wan Kenobi in the Mos Eisley Cantina.

Once all that is out of the way, we get down to what would have set the foundation for later sequels: Qi'ra's ambitions within Crimson Dawn (including a brief glimpse of who actually controls the crime syndicate), Han and Chewie's adventures in the Millenium Falcon and the seeds of the budding revolution against Imperial rule.

It is important that the latter takes up the last third of the movie.  Although a major event (Han's ultimate acquisition of the Falcon) occurs toward the end, that last part of Solo is less going over all the events mentioned in the original trilogy but hinting that the sequels may have been closer to Brian Daley's Han Solo novels that have now been relegated to the Legends side of the Extended Universe.  Those novels may have been pulp science fiction but, truthfully, so was Star Wars before everyone began to take it way too seriously.  They also dealt with the underworld of the Empire and introduced a number of more mundane environs that made that world feel more real.

Though the plot was totally different, this movie felt like one of those books.  The Imperial military is strong, but obviously has enough of a desertion problem that, as long as you don't get caught, no one seems to care - there are always more young men with no future prospects willing to join.  As hinted in the original trilogy the majority of the inhabitants of the Galaxy, human or otherwise, continue on as before and just try to stay out of the way of the Empire and eek by however they can; in fact, it's hard to say their life was any better under the Republic, but we see how Palpatine's heavy hand when dealing with his subjects eventually produced his downfall.

Although a bit on the pretty side, Alden Ehrenreich eventually becomes convincing as a young version of Han Solo.  Many of his future choices (as well as a hint of his deeper sense of morals) arises, and while there is a good argument that there were other actors that tried out for the role that looked more like Harrison Ford, Ehrenreich manages to capture the feel of the character.  It's not a mistake along the lines of casting Hayden Christensen as Anakin.

Emilia Clarke and Woody Harrelson bring quite a bit of character to what could have been two-dimensional roles, which is nice since they could have been just throwaways considering that these are the first time we meet these people.  They don't have the baggage of having a whole Wookiepedia history behind them, but they still become characters we care about.  Qi'ra certainly would have (or may, if things turn around) evolved into a possible early nemesis for Han or possible ally when going up against the Empire - either is possible given her position at the end of the movie.  Donald Glover also helps give Lando more backstory, which also has a bit more leeway as little was known about him in the original trilogy outside of being a former acquaintance of Han and someone with questionable loyalty.

Although in every way Rogue One: A Star Wars Story was superior to Solo, the latter feels more like the better EU novels that many fans grew up reading in lieu of further movies which we were sure would never happen.  Keep in mind much of what we learned about Han Solo came from the books, as we only had three movies, a holiday special and some awful Ewok adventures outside of printed media.  While the main flaw is that the script retreads things we already know happened in Han's life (although it is obvious - and always was - that he exaggerated as he got older), there is still enough that hasn't been revisited time and again to keep things interesting.