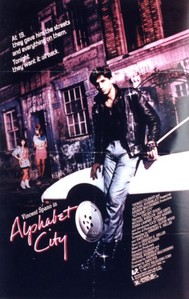 I know about as much about Vincent Spano as I do about Alphabet City itself in the 1980s.  I largely decided to watch this since I recently reviewed the Paul Morrissey movie Mixed Blood, which was filmed in the Lower East Side neighborhood itself in the same time period as both of these movies are set. I assume, with the dilapidated buildings and urban wasteland, that a good portion of this was filmed there as well.  Amos Poe, whose biggest claim to fame at this point was the 1976 film The Blank Generation, which introduced the world to New York City's punk scene, is definitely no stranger the environs.

Still, the movies couldn't be more different in tone and feel.  In many ways I was wondering just what type of film Poe was trying to make.

Johnny (Vincent Spano) is an upcoming player in a mob family.  He controls the drug flow and all the business in the Alphabet City area of Manhattan.  He has had considerable success, enough so that everyone knows and fears him.  He lives in a loft in the area with his girlfriend Angie (Kate Vernon) and their infant child.

Also in the neighborhood is his mother (Zohra Lampert) and sister (Jami Gertz).  However, there is a major problem; they happen to live in a tenement building that Johnny's boss Gino (Raymond Serra) has ordered be burned so the mob can collect the insurance money.  While Gino and his associates could care less about the suffering they intend to inflict, Johnny does, and tries to at least get his mother to leave.  She refuses, deciding she would rather die than be run out of her house.  Meanwhile, his sister is embarking on her own career as a high-paid escort - something Johnny tries to put an end to quickly.

Things spiral down from there.  His main street contact Lippy (Michael Winslow) has become unreliable due to his own addiction, but still remains loyal.  He tries to warn Johnny that things are about to go bad for him.  While Johnny hesitates on torching the building, he tries to go about business as usual.  Unfortunately for him, the squat where they do most of their dealing is raided, and Tony (Kenny Marino), the owner of a local club that is usually reliable with his payments, starts giving him the runaround.  All the while Gino keeps putting the pressure on Johnny to complete the job.

Instead, he decides that he has had it and wants out.  He confides in Lippy, who agrees to help him.  He tries to convince Angie that it is time go, but she reacts much the same way as his mother.  After Tony tries to kill him, Johnny realizes that he is a marked man he decides that it will have to be that night.  Retrieving a bag of cash from what he has skimmed off the drug deals, he begins making his way back to Angie, and convinces her it is time to leave.  Gino, though, has decided it's time to take matters into his own hands, and two professionals have been dispatched to do the job Tony couldn't.

I have patience with most movies, but it always frustrates me when I watch something and realize that almost nothing happened.  Johnny goes out, spouts a bunch of nonsense, suddenly has a change in conscience when his activities affect him directly and decides to escape.  Lippy performs a deus ex machina, the end.  Do I care about Johnny in any way, shape, or form?  Do I care if he escapes his life of crime and gets to live peacefully with his artist girlfriend and young kid?  Not at all.  There is nothing about his character, and nothing that the movie does with his character, that makes me invested in his fate and future.

Amos Poe does try to do the Greek tragedy thing with setting all the events over one night, so I guess he was trying to set Johnny up as some traditional everyman on a redemption arc.  If he wanted us invested in Johnny then maybe he could have tried to film the movie less like a music video and actually invest some time in telling an engaging story.  Also, this guy is hailed as some sort of legendary independent filmmaker.  I find this hard to believe when much of the movie is obscured by blurry shots and, in one scene, so many lens flares that J. J. Abrams would be screaming, "Enough!"

I have scene some criticisms of Vincent Spano as an actor in this, but without seeing anything else he has ever been in (his credits show him largely playing bit parts after this) I can only assume he's doing his best with the generic dialogue and role he has been given.  He's not bad, but he's given nothing to do.  It strikes me that this movie was somehow to supposed to break him as a major star as well as move Poe into the field of directing mainstream movies, but it didn't manage to do either.

The actor it did jump start a career for in some ways was Michael Winslow.  Here he is a coke addict that's been doing too much of his own product, but he often steals the scenes he's in by doing his usual routine of sound effects.  I believe Alphabet City was filmed before Police Academy, although the latter came out earlier in 1984.  While he and his schtick were usually used sparingly in many of the movie roles he got over the years, it is one of the few things that stick out in this movie.  It needed more strangeness to liven up its plot and make it stand out.

Instead, we have a film that doesn't resonate on any level unless you are a fan of 1980s Trans Ams.