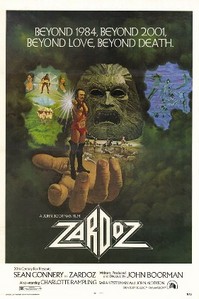 I don't think we'll ever see a period of cinema again that matches the early 1970s through the late 1990s.  That is a long period to think about, and film changed quite a lot during those decades; truly, the way films were made and audience expectations make films from those different decades appear almost like different species.  However, there was one thing that was true throughout: a director with a vision, if he played the game and made the big bosses enough money, could at some point do whatever they wanted - and, for some reason, studios let them.

This has rarely turned out well.  While Apocalypse Now somehow managed not to be the big disaster it looked like it was going to be, the same could not be said of Heaven's Gate.  As good as the latter movie is, it suffered from so much hubris from its own director and bad moves from the studio in order to try and survive after dumping so much money into the project that whether or not a quality film had been made was beside the point.  Kevin Smith had Dogma, Peter Jackson managed to remake King Kong (I know that was in the '00s, but it's one of the few outliers) and Martin Scorsese gave us The Last Temptation of Christ.  Good films all in their own ways, but definitely works of love that could easily have ended up as The Day the Clown Cried.

Which brings us to John Boorman, who had a hit right out the door with Point Blank and is responsible for one of the most respected (and quoted) films in cinema history - Deliverance.  So, when Boorman decided to make a film about bored immortals and the psychology of what makes homo sapiens actually human, while throwing in Sean Connery in a ridiculous getup and a giant floating head, I'm sure someone along the way wondered if maybe disaster was going to strike.  In the eyes of many critics, it did, but even disasters can be fascinating things.

Zed (Connery) is an Exterminator.  The Exterminators are part of a race of humans called the Brutals, who live a largely hunter-gatherer existence in a post-apocalyptic wasteland.  The Exterminators worship their god Zardoz, who visits them in the form of a giant stone head that spews forth guns in exchange for crops.  The guns he gives them are so that they can control the Brutal population and, lately, to force them to farm.

Zed, unlike others in the wasteland, is curious, seizing upon the opportunity to hop aboard Zardoz as it takes off for wherever it comes from.  Inside, he finds Brutals naked and wrapped in plastic, as well as a curious man named Arthur Frayn (Niall Buggy), whom Zed promptly shoots.  Frayn falls to his death, but the head moves on, arriving at Vortex 4.  Zed disembarks and hides, eventually finding Frayn's home and discovering who he was, while the inhabitants of the Vortex unload the goods before the head moves on to its next destination.  He begins to explore and is unknowingly capture by the scientist May (Sarah Kestelman), who becomes intrigued and wants to study him.  Consuela (Charlotte Rampling), one of the leaders of the Vortex, instead believes that he should be killed as quickly as possible.  The Vortex votes, and Zed is given a finite time to live as May studies him.

During this time he is put under the care of Friend (John Alderton), a historian that hopes Zed can be of some use to him for menial jobs.  Friend also hopes that Zed's arrival may mean an end to the boredom of his current existence.  In the course of the rounds delivering food, Zed is shown what is slowly becoming of the Eternals, as the denizens of the Vortex call themselves: since no one can die, the ultimate punishment is to age Renegades so that, instead of asking questions and bothering everyone else, they stay in a state of constant senility.  Elsewhere, there are the Apathetics, who have become so bored with life that they barely even move to retrieve the food provided them.

In the course of May's studies she finds out that Zed is not as he seems.  Instead, over the hundreds of years of selective breeding by Frayn, who was given carte blanche on how he handled the Brutals, Zed and other Exterminators have become stronger and resilient while still maintaining the ability to breed and, after a long period of time, die.  May is initially interested in the breeding aspect as no new children are being produced by the Tabernacle, the central machine which keeps them all alive and in a stable balance.  Meanwhile, Friend and a number of others are more interested in the prospect of finally being able end centuries of pointless existence.

Friend, for his troubles, is aged and placed with the Renegades, while Consuela accuses May, when she catches her in a pre-coital state with Zed, of bestiality.  Zed goes on the run with Consuela and her supporters in pursuit, and it turns out that the other Exterminators followed the head as it crossed the land.  The only thing blocking them from invading the Vortex is an invisible barrier, which would be shut down once Zed destroys the Tabernacle - something that Friend and others are more than happy to help him do, as it would finally set them free.  While Consuela has a change of heart about killing Zed, he also has a change of heart about rejoining his old companions, and in the end the two realize that the world is once again full of possibilities.

I often see reviews of Zardoz calling it an incomprehensible mess.  It is quite comprehensible if one is paying attention, and there is really plot trickery, red herrings or dream imagery.  I think the fault lies there; there are so many philosophical asides and in-depth looks at what became of humanity in the 300 years since whatever apocalypse happened (including going to space - the purpose that the Tabernacle and immortality was originally developed for) that it just seems that the movie is loaded down with strange goings on.  In a way it is, as well as loaded down with pretense, but they all easily serve the plot and are easily understood.

I think also the delivery of the material puts many viewers off.  Sean Connery's outfit, as well as most of the clothes worn by the Eternals, is enough to cause fits of laughter from the start.  These are supposed to be brutal warriors and enforcers of a religion based on blood, but their uniform is modified diaper.  As for the Eternals, they are free with their bodies, but this is one of those times when an abundance of nudity was anything but erotic, no matter how attractive Sarah Kestelman and Charlotte Rampling are. After getting over the laughter, one finds themselves mired in less of the science fiction action film promised and more deep into a story of what it is to be truly human.

With all that is going on Boorman unfortunately made most of the characters, even Zed, without dimension.  He's the antihero that becomes a savior, but he is given little to do once he is in the Vortex, and he is there for almost the entire film.  The only character given any real depth is Friend, and John Alderton manages to shine in a role that is actually key in the events that happen.

This is quite an enjoyable film, and nowhere near as bad as its reputation, but John Boorman made the mistake of not going further.  More depth with Zed, more reason behind a relationship between him and Consuela blossoming, and even, dare I say, a slightly less straightforward plot would have helped.  As it is, there are long periods where not much happens followed by a number of time jumps, which is where people seem to get confused.  A bit more investment in the characters, and even more risk-taking, and the reception of this movie would have been much different.