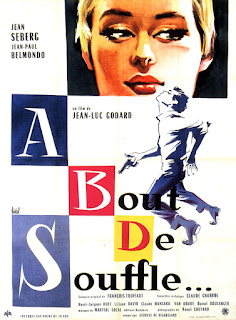 With films, much like literature, we are told there are certain films that we need to watch.  Not that we'll enjoy them or get anything from them, but because of some innovation or decree of the critical powers that be.  Often they are part of some movement of some sort, and elements of the film were revolutionary at the time it was done.  We are looked down upon with scorn if some reason we are not blown away by the genius of the movie.

When I finally get around to watching these movies I am often underwhelmed.  Take Belle du jour, for instance.  A big deal was made a number of years ago when it got re-released, and it's hailed as one of Luis Buñuel's greatest films, if not his masterpiece.  When I finally watched it I thought it was surprisingly straightforward for a Buñuel film, but didn't see anything striking or amazing about it.  It's good, but Buñuel has done better.

Jean-Luc Godard is hailed as one of the foremost innovators of French New Wave, a film movement from the 1950s and early 1960s in which a number of French film critics and fans began to make their own films, largely independent, as a refute to what they considered the staleness of French cinema at the time.  In essence, they created what many Americans picture when they think of French cinema today.  The methods used eventually bled over into Hollywood and British film making, and helped to inspire independent film makers around the world.  Although never organized as such, as a movement it is extremely important, and a number of important films and directors came from it as well.

That said, Godard has always been a hard sell for me and his first, and supposedly best film, Breathless, is no exception.

Michel Poiccard (Jean-Paul Belmondo) is a petty criminal.  He steals a car to get cash so that he can convince an American journalist named Patricia (Jean Seberg) to go to Rome with him.  He met Patricia in Nice at some time past and had a brief affair, but he became infatuated with her.  While taking the car to the fence his rigging to get it running fails, and a passing motorcycle cop recognizes the car as being stolen.  On an impulse Poiccard shoots and kills the police officer.

Knowing that the authorities will soon be looking for him he contacts Patricia and tries to pressure her into leaving for Rome, but she is insistent on staying in Paris as her career is beginning to advance. Despite her misgivings, she eventually rekindles her affair with Michel, unaware that he is wanted for murder.

Over the next few days he keeps an eye on the papers, becoming aware that he was identified and becoming more desperate as his picture makes the front page.  He also becomes more desperate in trying to collect money that is owed to him, repeatedly attempting to contact his colleague Antonio Berutti (Henri-Jacques Huet).  Meanwhile, he is recognized by a passerby, as is Patricia.  Inspector Vidal (Daniel Boulanger), in charge of apprehending Poiccard, confronts Patricia at her place at work and applies pressure via threats of passport and work visa problems if she does not cooperate.

As it appears Poiccard's plans may come together just as Vidal is closing in, Patricia must decide whether love is enough to justify staying with (and protecting) Michel, or if she should do the right thing and turn him in.

One of the major caveats for funding the film was that Godard must make a movie that made sense.  This constraint on him does help keep Breathless largely on track, but there are still some problems here.  The scene between the two in Patricia's apartment is obviously meant to give context to their relationship, but it goes on much longer than necessary.  It's a significant part of the 90-minute run time.  Another segment featuring an interview with a pretentious author (Jean-Pierre Melville) is also frustratingly meandering.  I am sure Godard meant the guy to look like an ass, and it might have worked in another film, but it's just another element that brings this movie to a crashing halt.

Still, for Godard, Breathless is surprisingly tight on plotting.  It's still very French in how it is approached, particularly the violence.  French directors of the time always have to reference America and Hollywood action films in some way when displaying violence.  Maybe it's why I have always preferred Italian cinema (including Fellini and other acknowledged artists, not just the pulp directors).  Instead of trying to be ironic, they often just try to outdo their American counterparts.  This annoyingly French habit of projecting violent tendencies in their own society on outside influence thankfully started to fade with Luc Besson, but this need to be artistic or ironic about it is always frustrating - especially since the climactic scenes of this movie are a great action scene in themselves, largely because Godard drops the pretense.

Now that I have got my usual Godard complaints out of the way (he would get more frustratingly obtuse and self-referencing as his career went on), let's get onto the good parts.  Both Jean-Paul Belmondo and Jean Seberg are wonderful, and I think it is this pairing that benefits the film more than anything that Godard was doing.  By accident or purpose, they just work together.  From what I understand neither of them expected the movie to even be released, much less be a major success, so they just went for it.  Belmondo never makes Poiccard likable, making it clear that he is just a collection of action and romance cliches that he has internalized to give himself a personality.  Meanwhile, Patricia is trying to make her way in what was a male-dominated profession, and unfortunately running into many of the uncomfortable situations that a woman of the time would encounter.  Her self-awareness that she practically has to prostitute herself to get anywhere in the world is heartbreakingly sad.

The movie strikes me as being quite close to being a jazz piece, and not just because of the wonderful score.  It has an underlying theme which Godard returns to throughout, but allows the film to go in directions both successful and meandering, much like a lot of the modern jazz coming out at the time.  Michel talking to himself in the mirror of the stolen car prior to the police officer's murder is one of the best scenes, and is close to vocal scat.  We have the long breaks for the time in the apartment and the interview, culminating in a more frenetic climax that returns to a number of the themes running throughout.

So, since this is one of those movies we are "supposed" to see, the question would be is it worth the time.  I have problems with Godard, and many of the problems in this movie pop up in his others in grander form, but this is still a work worth seeing.  The interaction between the leads, the location filming and some of Godard's stylistic touches make this unique, and many themes that still face us today tend to creep in whether they were intended or not.  It's importance in independent cinema is unquestionable, even if it is not the perfect movie that many critics like to make it out to be.