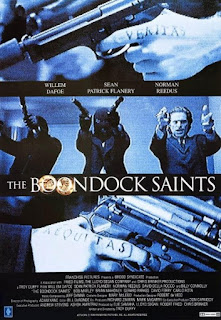 Troy Duffy is among those directors who have managed to push out a classic (albeit cult) film despite his tendencies to self-sabotage.  Unlike Richard Kelly (Donnie Darko), Duffy hasn't been given much of a chance to prove himself beyond this film, his only other movie being the 2009 sequel which, although not as good as this, was at least not a pretentious muddle.

That said, Duffy, if the documentary about the making of this film is to be believed, is his own worst enemy behind the scenes.  Miramax wanted the screenplay and was willing to sink a good amount of money into it, but Duffy began acting like a Coppola before he had even filmed anything and lost that deal.  The deal he made with Franchise left him, and his cast, without the home video earnings, which is where The Boondock Saints eventually made a profit.  The film had the bad luck to come out soon after the Columbine High School shootings, and thus debuted in only a handful of theaters.

Duffy also seems to have had a tendency of attacking many of the actors that might have played the MacManus brothers.  In the end, that led to the casting of Norman Reedus and Sean Patrick Flanery, who were relatively unknown at the time.  In all honesty, I can't see any other actors filling these rolls at this point, because the two actors, though not looking too much like they would be brothers, definitely have the chemistry worked out for the parts.

Connor (Flanery) and Murphy (Reedus) MacManus are Irish-American brothers living in a run-down squat in Boston.  They work at a meat-packing facility and hang out with their friend Rocco (David Della Rocco), a low-level courier for a local Italian mob family.  While celebrating St. Patrick's Day at their favorite bar, the owner Macklepenny (Robert Pemberton) informs them that the bar will be closing.  Soon after, Ivan Checkov (Scott Griffith) arrives with some goons from the Russian mob to inform everyone that the bar will be closing that night.  The patrons disagree, leading to shenanigans.

The next day the Russians are found dead in an alley.  While the local detectives try to figure out what happened, FBI agent Paul Smecker (Willem Defoe) arrives on the scene and pieces together the scene.  The Russians had returned the next morning to get revenge and the brothers kill them in self-defense.  They turn themselves in and are given a night's protection in a holding cell to keep the press off of them, but not before making quick friends with Smecker and gaining the admiration of the Boston police force.

While in the cell, the brothers have the same epiphany, and decide that their mission in life is to rid the city of all those who would do evil.  They decide to start with a meeting of Russian mobsters at a local hotel, where their goings-on are interrupted by Rocco disguised as room service.  It turns out that Rocco's boss Yakavetta (Carlo Rota) decided to both stir things up with his Russian competitors and get rid of Rocco.  Once he realizes what has been done, Rocco kills a number of Yakavetta's men and joins the boys on their quest.

Yakavetta, thinking that Rocco is solely responsible and quite bewildered at the killing efficiency of a man he thought was a buffoon, calls for the services of a legendary assassin named Il Duce (Bill Connolly), who has spent the last quarter century in prison.  The family arranges for his parole and puts a hit out on Rocco, leading Il Duce to get in a firefight with both Rocco and the brothers during an attempt to take out one of the family's cleaners.

They escape, but for Smecker, the escalation of what appears to be a war against both the Russian mob and the Yakavetta family becomes more and more baffling.  As he tries to figure out what is happening he becomes more and more unhinged until, in a drunken stupor, he suddenly comes to the revelation that the MacManus brothers are behind the whole thing.  The problem is, he agrees with what they are doing and is torn between doing his duty as a law enforcement official or following his conscience and assist them, especially with Il Duce still hot on their trail.

I have oversimplified much of what happens for a reason.  The movie has rightfully been compared to the movies that Quentin Tarantino and others did in the 1990s, to different degrees of success.  For example, Duffy uses non-linear storytelling, often showing the aftermath and inspection of the brothers' spree before showing what actually happened, which often is completely different than what Smecker of the Boston police suspect.  In addition, the world in which the brothers operate becomes more and more surreal as the movie goes on.

Norman Reedus and Sean Patrick Flanery work off each other in such a manner that it is quite believable that these two have lived their lives together all their lives and are inseparable.  They have the inevitable arguments that siblings have and, often, have little idea about what they are doing when it comes to carrying out their plans.  Part of the point is that for them to have been successful is that God must truly be on their side, as they are two of the worst vigilantes ever.  In his supporting role, Billy Connolly is basically given the job of looking scary and cool, and he does it well.  David Della Rocco is largely here because he was friends with the director, but he often has great comic timing as a character that, despite being called "The Funny Man", is rarely funny, but largely just unlucky.

That brings us to Willem Defoe.  Paul Smecker is a flamboyant, self-hating homosexual, and also a brilliant detective with a black-and-white idea of justice.  There is so much packed into this character, and Defoe plays him perfectly, whether he's dancing around to classical music while interpreting a crime scene, insulting his young lover or treating the entire Boston police force as his personal gofers.  Defoe is just as good at interpreting these strange, flawed characters as Christopher Walken or Gary Oldman, but for some reason never gets enough credit.

Despite all the problems with Troy Duffy's ego, the low budget, lack of distribution and critical backlash, The Boondock Saints has rightfully gained a following since its release.  Whether on purpose or on accident, it is one of the best movies of its type and an amazing piece of filmmaking.  I understand why a sequel was made, and I am one of the few people that didn't hate the second film, but it was never possible that anything from this movie could be duplicated.