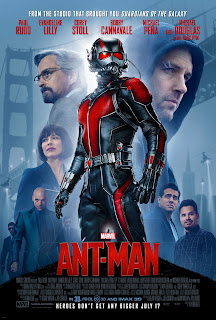 Before Deadpool succeeded in making the humorous anti-hero version of the current superhero films a viable thing, the main Marvel universe (Deadpool is part of the X-Men universe) tried a similar approach with Ant-Man.  The Russo Brothers also managed to make Ant-Man work during his appearance in the latest Captain America film.  Too bad his origin film isn't that interesting.

Scott Lang (Paul Rudd) is a master thief.  Well, not too much of a master, because he got caught, and has served his time.  He wants to go straight, but unfortunately the world doesn't have much use for ex-cons.  Neither does his ex-wife Maggie (Judy Greer) or her new beau, who do everything to keep him away from his daughter Cassie (Abby Ryder Fortson).

Out of desperation he agrees to go along with a scheme cooked up by his friend Luis (Michael Peña) to rob the estate of Hank Pym (Michael Douglas).  He succeeds, but instead of the money they were expecting he finds a suit.  When he puts it on, he finds out that Pym is controlling it, and set the whole thing up so that Lang would become the new Ant-Man.

It turns out that Pym developed a formula in the 1980s and became the original Ant-Man, but decided to keep it from the U.S. government.  He left his business in the hands of his apprentice Darren Cross (Corey Stoll), who used his resources to find a way to duplicate Pym's formula so he could sell it to the highest bidder and control who uses it.  Pym's daughter Hope van Dyne (Evangeline Lilly) has remained in the company so that she can keep an eye on Cross's process, and Scott's recruitment is a desperate attempt to put Cross out of business.

In typical fashion, Scott learns how to use the suit, which can shrink him infinitely (he is warned not to go the sub-atomic level) and has the added benefit of allowing him to communicate with a variety of ants to accomplish such tasks as shorting out electronics or scouting locations.  Hope originally thinks recruiting Lang is a mistake, but eventually warms to him in the tried and true Hollywood fashion.

Also in tried and true fashion, it comes down to Lang to stop Cross once he uses a suit of his own to become Yellowjacket, and ultimately threatens Lang's family.

Paul Rudd isn't bad, and it's good to see Michael Douglas playing a major role again.  Some of the effects are good, but in many cases Honey, I Shrunk the Kids did them better.  There are absolutely no surprises throughout this film, and while it is supposed to be a more humorous take, little of it works.  The funniest part is a sequence thrown in for no other reason than to feature Falcon (Anthony Mackie) simply as a tie-in to the rest of the Avengers.

Ant-Man is watchable, but it is simply the same thing that you have seen numerous times over the last decade, just with some new post-credit sequences.