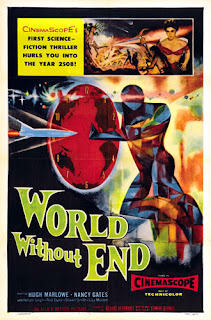 In 1987 a hit-and-miss sketch comedy called Amazon Women on the Moon featured the titular movie title as the wraparound device to hold together the different skits.  In it, the crew of a spaceship lands on the moon and, not only finds the atmosphere hospitable, but that it is also occupied by beautiful women.  Some are savages that want to kill our heroes, but of course the good ones can't resist our lantern-jawed heroes.

While the parody used a number of '50s sci-fi cliches (borrowing heavily from the more serious space exploration film Destination Moon from 1950), watching World Without End gives one an idea of where they got some of their material.

Rather than the moon, the astronauts, consisting of Captain John Borden (Hugh Marlowe), radio operator Herb Ellis (Rod Taylor), navigator Hank Jaffe (Christopher Dark) and the scientist Dr. Eldon Galbraithe (Nelson Leigh) are on a flight to photograph Mars for a potential future landing.  They lose radio contact for Earth, and upon heading back suddenly find their rocket achieving speeds it was never meant to.  They eventually crash land on a strange planet which, after some exploration, they find out is a future Earth that has been devastated by a nuclear war sometime in the past.

Naturally, Hank, the only married member of the crew, is upset that he will never see his wife again, while Herb will settle for any woman.  After traipsing down the mountain from which they landed and fighting off a giant spider, the group make camp for the night, only to be attacked by savage cyclopic cavemen.  Fleeing another attack from them in the day, they enter a cave and find that in it is a door that leads into an underground corridor where the remains of human civilization dwell.  Hundreds of years ago the elite had built a place to survive.  That society, now led by the timid Timmek (Everett Glass) and the jealous, and ambitious, Mories (Booth Colman) has a dwindling birth rate and no real interest in tangling with what Timmek calls "mutates."

What the astronauts discover to their delight, however, is that the society is also filled with buxom young women that are excited as ever to find that any men other than what they are cooped up with exist.  While Mories seethes with hatred as Borden courts Timmek's daughter Garnet (Nancy Gates), he and the others also hatch plans to return humanity to the surface and deal with the mutates once and for all - whether the old men like it or not.

You know you are dealing with a movie from the 1950s when it is possible to trick a woman into giving away that she speaks English by calling her bow-legged and that the mere arrival of anything with a whiff of testosterone will have the women tripping over themselves.  The whole thing could have been ripped from the cover a men's adventure magazine of the time.  It doesn't make our astronauts any less right, of course.

Despite all this posturing, there is a heavy essence a woman's true role in the 1950s.  Though much is made in comedy and otherwise about women being beaten down and subservient at this point, the fact is that, like today, no man that wanted to get anything done tried it without running it by his wife first.  Mories is presented to be the worst that men can offer, while Borden is some comic-book standard that is laughable today, but in the end the astronauts' plans to turn the dying society around happens largely with the women's blessing - even if they almost get executed because of petty jealousy on behalf of the savage outcast Deena (Lisa Montell) who almost lets them get banished because she saw Herb fooling around on her.  In the end she is actually part of the key to their triumph over the mutates.

It may also come as a surprise that, though this movie feels like a B-movie in every way, it was an attempt for the newly christened Allied Pictures (formerly Monogram, which specialized in low-budget B-films) to be taken more seriously.  It's in color and in Cinemascope.  However, the dialogue is still as clunky as ever and the special effects sub-par even for the time (that spider rivals Ed Wood films for ridiculousness).

In the end this comes off as being a nice distraction, and as a nice little trivia question when asked what other time travel movie Rod Taylor was in.

Spider-Man went through so many reboots in such a short time that it was ridiculous to expect audiences to stay around for each iteration.  The ironic part is that it took years to get one of the most popular superheroes on the big screen, finally arriving with the 2002 Sam Raimi film.  After Raimi's trio of films a new shot at the franchise, The Amazing Spider-Man , when down in flames after the second movie.  It was to the credit of everyone involved in the Marvel Cinematic Universe that when they brought him back it was in Captain America: Civil War , and not a standalone film. When that standalone film, Spider-Man: Homecoming , did arrive, it was an enjoyable surprise.  We were treated to a film where the makers correctly estimated that everyone already knew the origin story and, in a twist many of the Marvel films, gave us a human villain for Peter Parker to deal with rather than some giant worldwide threat.  The humor worked, the characters (even Parker's friend Ned
Read more