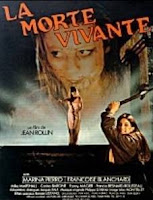 A disposal crew is secretly getting rid of chemical wast in a 12th century crypt located near a castle previously owned by the Valmont family. The last surviving member of the family has recently passed away, and was buried with all her jewelry, so Georges (Jean-Pierre Bouyxou) decides to make a detour and grab what he can. His partner spots a second casket, this one belonging to Madame Valmont's daughter Catherine (Françoise Blanchard), and reluctantly checks to see what she may have. An earth tremor hits, knocking the thieves on their butts and releasing some of the chemical sludge, which wakes Catherine from her eternal rest and sends her on a violent search for the blood of the living.

Returning to her family home, she finds that it is up for sale, and dispatches the real estate agent (Dominique Treillou) and the agent's boyfriend when they decide to use it for a tryst. The house itself starts bringing back Catherine's memories, particularly that of her best friend Hélène (Marina Pierro), who by coincidence is also thinking of Catherine and decides to call her mother. Instead, she hears the familiar sound of a music box playing, and travels to the castle to see if Catherine is still alive. Arriving, she finds the dead bodies and, slowly comprehending what has happened to her friend, begins to procure more victims.

Meanwhile, Barbara Simon (Carina Barone), a French actress on vacation with her American husband Greg (Mike Marshall), photographs Catherine and becomes intrigued once she finds out the woman has been dead for two years. Undeterred by an attack from Hélène, Barbara is determined to get more photos and let the village know that Catherine still lives. Meanwhile, living is the last thing on Catherine's mind. She knows what she is, and just wants to return to death.

It may not be for all tastes. The way Rollin lingers long on Catherine as she feeds is equal parts voyeurism and Herschel Gordon Lewis, sometimes effective and sometimes laughably inept (the fake face on the real estate agent's boyfriend as he stumbles in after being killed, for instance). It also takes a little time to get going after the first couple of deaths, but where it goes is more than satisfying.